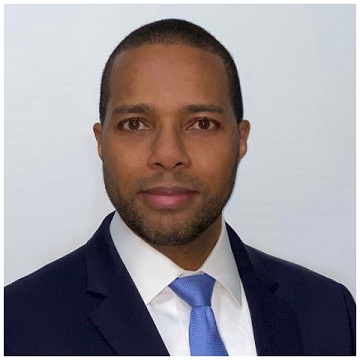 Malcolm King EE'97 was elected to the Board of Trustees in 2013, and he was elected Chair of the Board in 2020. He previously chaired the Audit Committee, and now serves on the Free Education Committee (FEC). The FEC is the committee that issued the plan to return to full-tuition scholarships, which was ultimately approved by the board, and now monitors progress toward the plan's objectives.  Mr. King is a co-chair of Cooper Union on Wall Street (CUWS), which is an alumni group that supports the school through fundraising initiatives and provides guidance to students and alumni interested in careers in financial services.

He is currently head of Cybersecurity Risk & Control at Wells Fargo. Previously, he served as a Managing Director at State Street Bank in the Corporate Information Security department. He also contributes to cybersecurity industry groups while providing guidance for regulatory compliance and best practices.

Mr. King grew up in Brooklyn, NY, attended Stuyvesant H.S., and received his BE in Electrical Engineering from Cooper Union in 1997. He currently lives with his wife and three children in South Orange, NJ.

We spoke with Mr. King to find out more about his new role as Chair of the Board of Trustees.

What motivated you to run for chair to the Cooper Board of Trustees? What do you think made you stand out from other candidates?
The Board chair selection is much more of a collegial and collaborative process than a competitive process.  It was really a shared decision rather than a contest with other trustees.  I’ve been on the board for seven years, so I am one of the longer tenured members.  I believe that I was viewed as a strong choice based on the amount of time I had served as well as the experience I had contributing through some turbulent times and a presidential transition.  As Chair of the Audit Committee, I had gained a lot of useful knowledge of our financials and risk management.  And as a member of the Free Education Committee (FEC) I had the experience contributing to our strategic plan.  So, I believe my colleagues took all of that into consideration including my interactions with each of them when they made their decision.  I’ll be working hard to justify their faith in me over the next couple of years.

What are your most important values as the newly elected Chair of the Board of Trustees?
First, commitment and diligence are very important, not just for me, but for all of the trustees. We are a fiduciary board with significant governance responsibilities, not a board that just organizes a gala once a year, so the institution needs us to be fully engaged and diligent in our duties. Given our history, we’ve seen what can happen if the board is not fully engaged and vigilant. Fortunately, the institution benefited from the tremendous contributions of key trustees and chairs over the past several years who guided the institution through the crisis. They set a high bar for commitment and diligence and they’ve been my inspiration and my guide.

The second value, or area of focus, for me is maintaining a relationship with the community. We’ve had a lot of problems with mistrust and a lack of credibility over the past several years.  In my view, there really were not any bad actors, but there were some tremendous changes that needed to happen and the community did not feel informed. So, ensuring that we’re communicating regularly, that we’re soliciting input, and that we’re as transparent as we can be will help us maintain that trust and make it clear that we’re acting in the best interest of the institution. I thought the various events that were organized to discuss the FEC Plan as we were developing it were great examples of engaging the community effectively. I’ve also enjoyed speaking with staff, faculty, and fellow alums at the informal events that the trustees have hosted. I’ve missed those, and I’m looking forward to the time when we can have those again.

What first steps will you take as newly elected Chair of the Board of Trustees?
The most important thing for me has been to prepare by getting access to all the necessary information and getting acclimated to the various responsibilities. I started that process in the fall.  After I was elected, but before I became chair in December, Rachel Warren—the prior chair, started to get me up to speed and gave me a lot of guidance on the role. Trustees are generally members of two to four committees, but as chair you are effectively a member of all of the committees, so Rachel invited me to join all of the fall committee meetings. I had not previously joined the Governance, Investment, Finance, or Academic and Student Affairs committee meetings; however, I did this time around. I have spent time reading publications on board governance and rereading some of Cooper’s own board governance documents. I have also been reaching out to fellow trustees for one-on-one calls to understand how they feel about the Board and their engagement, to receive their thoughts on plans for the coming year, and most importantly, to strengthen the relationship and let them know that I’m always available to talk about board concerns.

Please share with us what Diversity, Equity, and Inclusion mean to you and why they are important?
Cooper Union was founded with the objective of being inclusive as Peter Cooper wanted to provide the opportunity to enjoy a formal education regardless of economic status, race, or gender.  Staying true to the founder’s vision really compels us to stay engaged and be aware of how we are supporting inclusion. So, with that said, it is really the history and the intent of Peter Cooper that inspires us as an institution and as a board.

Most people guess that I was raised with strong awareness of social justice and the history of civil rights because of my name, and they are correct.  Sometimes, I clarify for people that I am named after Malcolm X, not Malcolm Forbes, just so they’re sure.  There are two core principles that I have embraced from Malcolm X’s life and speeches.  The first is the importance of highlighting injustice where it exists, to call attention to the problems, and to acknowledge the people who experience it.  The second is the principle of self-empowerment and looking within to take action to advance oneself. Malcolm X often spoke about the positive habits individuals needed to adopt to overcome injustice, often with a heavy focus on education. In other cases, he advocated for cooperation within the community to move things forward.

Societies and institutions benefit from supporting Diversity, Equity, and Inclusion principles because they allow more people to fully contribute as productive members of the society or institution. We can continue to promote equity as a society by ensuring that people have a fair chance to succeed. People’s opportunities may often appear to be equal, but there are many unseen factors that put some at a disadvantage relative to others. Things such as childhood poverty and poor nutrition are contributors, so social support to offset those factors can be a big help. For inclusion, I believe that the most effective approach is to promote awareness and exposure. Unconscious bias is a significant contributor to exclusionary behavior or tendencies, but educating people on the existence of those biases may help reduce them. Also, it has definitely been shown that exposure to examples that are contrary to stereotypes promotes more inclusive behavior.