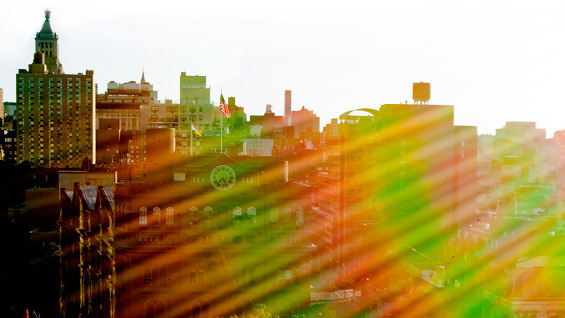 This year will see the largest number of summer programs ever offered at The Cooper Union, five in total. These include one brand new program, NYC-Summer@Cooper, developed through the equally new Institute for Design and Computation, as well as a significantly re-imagined program, the Summer Art Intensive, adapted from the long-standing Outreach effort through the School of Art. Other established programs like the Introduction to Architecture at The Irwin S. Chanin School of Architecture, the Summer STEM Program at the Albert Nerken School of Engineering and the Summer Writing Program taught through the Faculty of Humanities and Social Sciences continue to grow.

These fee-based programs are growing, in part, to help develop new sources of revenue for Cooper.

The newest offering, NYC-Summer@Cooper, targeted at undergraduates from outside the New York area, offers the opportunity to interact with Watson, IBM's "cognitive system" popularly known for winning "Jeopardy!" against two human champions of the game in 2011. The participants will work together in teams, simulating a start-up environment to develop a business idea that leverages Watson's artificial intelligence and natural language capabilities.

"We really look for students with diverse backgrounds," Bonnie John ME'77, the director of the program, says. "Undergraduates from any major can apply and will contribute a lot because different viewpoints are needed to make a great project. We specifically target people who are interested in business, technology and design." It is accepting applications until April 12.

Students will be granted the use of the technology that makes up Watson, the headquarters of which is now at 51 Astor Place, directly opposite the Foundation Building. Watson can take massive amounts of textual data, for example every medical journal ever written, and process it in a way no single human could. "It is not like programming a computer," says Dr. John, who worked at IBM prior to coming to Cooper Union in 2014. "You do not tell it what to do. You give it knowledge. Then you ask it questions that it will try to answer. When it gets it right, you say, ‘Yay!’ And when it gets it wrong you say, ‘No!’ You train it. It is like teaching a two-year-old except it is a two-year-old that can read medical journals."

Besides spending their days with Watson, NYC-Summer@Cooper students will be immersed in the technology and cultural scenes of New York as part of the program. "I am so excited about it," Dr. John says. "The ability to bring together students from all over, from so many different disciplines in a very intensive program. To show them the city I love. To see Cooper Union and what it is like to be in the East Village. And have Watson! It can’t be any better than that."

Meanwhile at the School of Art the summer session of the long-standing Outreach Program will be reborn as the Summer Art Intensive. It's "intensive" because the yearlong Outreach Program gets collapsed to four weeks and it allows the students to select a concentration in a particular discipline.

"The Outreach program has always been modeled on the foundation year of the School of Art," Stephanie Hightower, director of the Summer Art Intensive, says. "While the summer program continues the creative writing and art-issues seminar, the studio courses will require a more intense choice to be made: ‘Where do you see yourself in the future?’ It’s an opportunity for a little more responsibility on the student's part. That’s probably the newest element to the program."

The Outreach Program will continue during the academic year, offering free art classes to New York City public high school students. The Summer Art Intensive will charge a fee, though full scholarships are available, and is open to any motivated high school student anywhere. (Accepting applications until April 10.) But the application process remains selective. Students must provide artwork and a short statement of intent. Like the School of Art, class size will be limited to no more than 16 students. "That is the difference between us and other pre-college art programs: we are not about packing them in. You can sit in the back row and still be seen," Stephanie Hightower says.

The Summer Art Intensive will also offer an artists' residency. Given a studio space adjacent to the classrooms, professional artists will create original work during the four weeks. "The artists we select are excited about having students to talk to. It’s a really inspiring thing. It connects the dots for a high school student to see a human being talk about making art and not just seeing things on a museum wall." At the end of the session the work of the artists and the students is displayed in a public presentation. This year there will be four visiting artists: Natalie Beall, Timothy Hull, Zahra Nazari, and Sung Won Yun.

When students leave the program they will be more than just prepared to apply to an art school. "They are not done when they leave us," Stephanie Hightower says. "We are not wrapping up a portfolio gift for them. We are helping them learn how to think and process visual problems. When they leave us, they don’t leave with a recipe. They leave with a new way of understanding how many ways there are to tackle a problem, and they leave with fundamental visual language skills."

While NYC-Summer@Cooper and the Summer Art Intensive are the two newest summer programs at The Cooper Union, they join a growing group of established summertime programs offered by the schools of architecture and engineering, as well as by the Faculty of Humanities and Social Sciences.

"There is tremendous interest among high-school students to engage design at the scale of architecture and the city," says Elizabeth O'Donnell, acting dean of the school of architecture. "So we decided to build on the energy and excitement for the established Introduction to Architecture program to create a distinct program for high school students. They will have the chance to explore the fundamental issues of architecture in the design studio as well as site and office visits and decide if architecture school might be a good next step for them."

At the school of engineering, the Summer STEM Program, aimed at high school students interested in expanding their skills at science, technology, engineering and math, continues to build on its first successful year as a paid program in 2014. It began nearly 30 years ago as an outreach effort offering free research and design projects mentored by faculty and current Cooper students. Recruitment wrapped up on March 23 and organizers anticipate accepting the largest group ever, up to 200 students after last year's 145. They may reach another remarkable milestone as well.

"Through increased grants and donations, we anticipate offering as many tuition-free seats to this program this year as we had before we started charging tuition last year," says George Delagrammatikas, associate dean of the school of engineering. "We've expanded the total number of students while maintaining the same number of fully funded students as we did two years ago: 65 at that time. It's gratifying that we continue to attract the best and the brightest students for whom the program will be transformative in their academic and social development."

But of all the summer programs, there is only one that students can take at home. The Summer Writing Program continues into its fifth year of offering high school students the chance to sharpen their writing skills before entering college. (Accepting applications until June 1.) This year will be the third time the course will be offered online via workshops done in real time. It also offers on-campus classes. "Last year our unique online class doubled in size, and we anticipate its continued growth," says Martha Schulman, director of the program. "Students in both forms of the course tell us that they feel much more prepared for the rigors of college-level writing after taking the class."