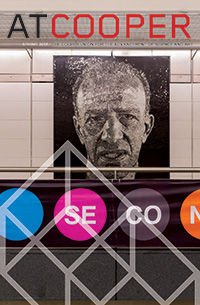 Outreach Programs: A Parallel Union
A fresh examination of Cooper's free or low-cost classes for working people and youth

What's Brewing at Cooper
Engineering professor Sam Keene’s cross-disciplinary course, “the science and art of brewing,” culminated with an exhibition and tasting

Dore Ashton 1928-2017
An eyewitness to art history, she taught generations of cooper students

Iselin Lecture
The former U.S. Attorney for the Southern District of New York will deliver the John Jay Iselin Memorial Lecture on April 6 (sold out)

Cooper to Cooper: The Archivists
The Cooper Union’s three archivists—Alexander Tochilovsky, Carol Salomon and Steven Hillyer—describe some of their favorite objects

Current Work: Nader Tehrani
Dean Nader Tehrani will present his work with NADAAA in a public lecture on April 5

The Return of a Bolted Book
Raffaele Bedarida, assistant professor, on reproducing a rare 1927 art book by Fortunato Depero