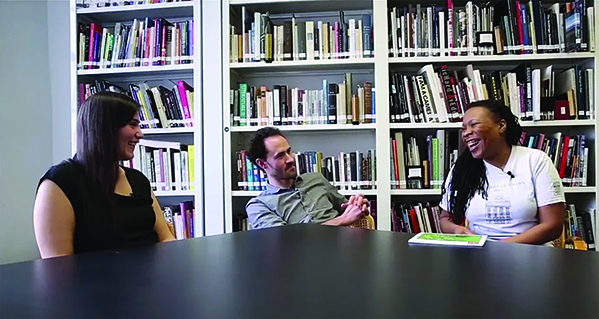 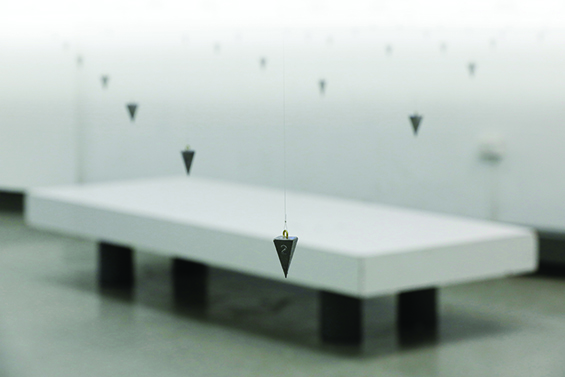 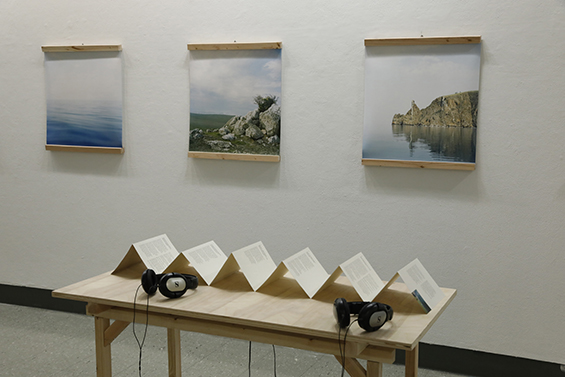 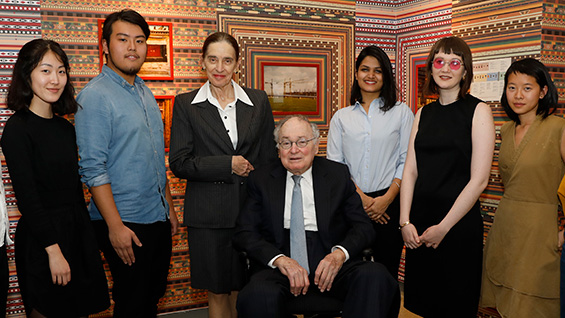 Catherine Sanso, Wes Rozen and Tomashi Jackson from the video 'Cooper to Cooper: 20th Anniversary of the Menschel Prize'

What if the horizon is not just a phenomenon that shows the limit of what the eye can see, but a sudden halt—the limit of the earth? Will we, one day, visit internet graveyards and lay flowers before digital tombstones? How is food security linked to cultural memory? Over the last two decades, more than 100 Cooper students have been given the chance to explore uncharted questions like these through the Benjamin Menschel Fellowship Program to Support Creative Inquiry. Purposely open-ended, the Menschel fellowships do not require answers to be presented, but instead culminate in the Benjamin Menschel Fellowship Exhibition, an annual public display of the year’s supported work that celebrates its 20th anniversary this year.

The Menschel fellowship was endowed by a generous grant given to The Cooper Union by the Horace W. Goldsmith Foundation to support studies in the fields of art, architecture, design and engineering. Richard Menschel, managing director of the Goldsmith Foundation, named the fellowship for his father, Benjamin. “Our desire was to attract intelligent, inquisitive, creative and articulate students and let them run with their minds,” Menschel and his wife, Ronay, say. “We like that every project provides a unique examination of its topic, which has enabled the participating student to learn far more about people, communities and traditions—as well as art and architecture—than probably originally conceived.”

Students apply for the fellowship in the spring of their junior year, or their fourth year as architecture students. The applications can be individual or as a group and must include a budget for the project, including materials for the final exhibition and travel expenses. Funding varies; it is typically capped at $4,500. A committee of faculty members representing the schools as well as the Faculty of Humanities and Social Sciences reviews the proposals, considering each applicant’s project, academic performance and motivation.

Sohnya Sayres, associate professor of humanities, has served as the Menschel fellowship’s program director since 2009. “This program, which covers almost a year of preparing, competing, actuating and exhibiting an original project of the student’s or team of students’ own making is, in structure and sophistication, a graduate program,” she tells us. Students receive mentoring along the way but the fellowship is self-directed. “We are pushing our students into a professional relationship to their work. And, marvelously, they have always succeeded.”

The fellowship is unique in that there is no final report or deliverable product required. “I think a ‘product’ might be that one’s mind has expanded,” Menschel says. “However, we expected most students would want to ‘show’ something.” The culmination is a public exhibition in the Foundation Building, where students determine how best to display their experience. For some students, that is difficult to grasp. “It was hard for me since it wasn’t how fellowships work in engineering,” says Catherine Sanso CE’14, a 2013 recipient. “I think it’s the only project I’ve been able to work on that was solely for inquiry—solely because I am interested in this, and I don’t have to validate it to other people, even though I think it affects everyone.”

“The Menschel provides a space for students who have questions that are a little off the beaten path,” says Tomashi Jackson A’10, who used her fellowship to measure the everlasting nature of food waste products compared to the transience of cultural memory in Belize. As these topics are hardly ordinary, there’s often no pre-existing discourse or existing research mechanism. “I met a lot of skepticism. People asked, ‘Why are you talking about trash?’ Jackson says. In Belize she conducted oral histories with residents of Dangriga Town and realized that, in a country with widespread poverty, a plastic bag can have a certain social cachet, as it demonstrates that the bag’s owner had had enough money to make a purchase. She documented their stories as well as evidence of environmental damage, while a colleague led workshops on turning Styrofoam waste into material for creating block prints. She then used drawing, sculpture and printmaking to translate her experiences for her exhibition back at Cooper.

Though the inquiries are unique, common themes have united Menschel projects over the last 20 years. Many students use the opportunity to travel, often to explore an issue close to their culture. In 2005, Edgar Pedroza A’06 engaged social, economic and architectural space in the region where his parents were born, Guanajuato, Mexico, to build a large monolithic land sculpture. Diana Yun A’14 went home to Kazakhstan to discover the music and community surrounding the dombra, a two-string lute specific to the Kazakh culture.

Cooper students have used the fellowship to explore topics that may be less conspicuous but nevertheless have a huge impact, including environmental and socially conscious issues. “The mission of Cooper Union is tied to the public in so many ways, I think it’s natural for us to think about the environment and things that are shared in society. Whether directly or indirectly, we were encouraged to take on some of the things society is wrestling with,” says Wes Rozen AR’05. Rozen’s project harked back to a childhood fascination with wind turbines. He documented the massive and elegant structures near his family home in the Bay Area by renting a helicopter and filming them from overhead. To further “capture wind,” Rozen built what he calls a “wind-catching, filmmaking machine”—essentially a cart with a windmill attached to it that would function at different speeds depending on the wind flow. He placed it on top of buildings and along a runway at LaGuardia Airport. The resulting images were, in a sense, created by wind, a force not seen in the photographs but integral to them.

Sanso also became interested in the natural world after growing up in the man-made environment of New York City. A native of Staten Island who saw firsthand the destruction waged by Hurricane Sandy, she traveled to Cambodia her sophomore year and discovered the dire need for clean water—both for drinking and for sustaining fish that the locals trolled. She used her Menschel fellowship to explore a solution, designing a pump and filtration system that could be used by local people with minimal technical knowledge. In addition, the system was built from local materials. She was proud to discover that it is still in use and has been fine-tuned by users. “Last time I looked they were doing a better version of what I had tried to implement. I’m sure they’re still making changes to it, but I can still see my original concept there.”

Alumni of the fellowship can trace their professional successes to their experience with the Menschel fellowship. For example, Jackson’s Menschel project led her to the Art, Culture and Technology program at MIT. “The research component of my project led me to want to be in a space where I could collaborate and learn from architects and engineers and planners,” she says. She continued her education at the Yale School of Art, receiving an MFA in painting. She is now on the faculty of the Massachusetts College of Art and Design. “The Menschel gave me the guts to pursue research as a part of a visual arts practice.”

Sanso’s career has been greatly influenced by her Menschel project. As a civil engineer at Thornton Tomasetti, an engineering design, investigation and analysis consultancy, she designs bioswales—green spaces around New York that collect and filter pollution from storm water, letting it return to the water table instead of combining with sewage wastewater. These small plots, called “rain gardens,” which have been inconspicuously placed all over the city by the Department of Environmental Protection, help alleviate the ever-increasing stress on the city’s sewage system. Sanso’s work, which includes site selection, soil borings, topographic and utility mapping, traffic analysis, vault inspections and plan preparation, focuses on the Flushing Creek Combined Sewer Overflow Tributary Area.

Rozen built his business, SITU Studio, with three AR’05 classmates—Basar Girit, Aleksey Lukyanov-Cherny and Brad Samuels—at the same time he was working on his Menschel project. SITU Studio is now a 45-person design practice and fabrication business. They also have a research division to explore spatial issues surrounding human rights. Their firm’s philosophy is similar to the type of thinking the Menschel fellowship encourages. “We take on things that we are curious about that might not exactly align with the traditions of a certain profession,” he says.

Rozen also credits his determination in part to this experience: “Through the support of the Menschel, the quirky interests of the students are legitimized and celebrated. As a 21-year-old, I found that very empowering. To have a personal interest supported in a meaningful way at a young age definitely gave me more confidence going out into the world and taking on things I cared about on a gut level.”