Remembering Milton Glaser, Class of 1951, a new exhibition in the colonnade windows of the Foundation Building, celebrates the work of one of the most influential graphic designers of the 20th century. Glaser, a 1951 graduate of The School of Art and a Bronx native, had an outsized impact on the visual landscape of New York, the city he loved with both its energy and eclecticism informing his renowned body of work. 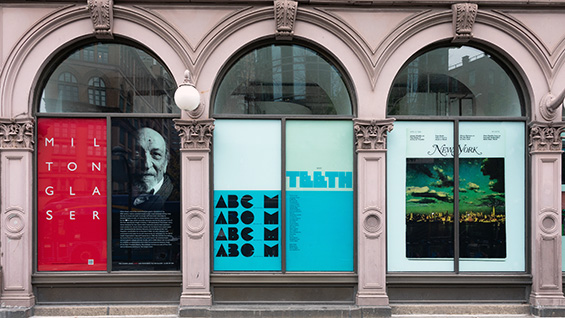 Recognized for the iconic I ♥ NY logo, a design Glaser created that succinctly expressed love for New York City, the exhibition features that famous mark and 24 additional design pieces that he created for New York and beyond. These include some of the city’s loftier institutions and its most quotidian—iconic posters for Carnegie Hall, Lincoln Center, and Brooklyn’s Theater for a New Audience, identity for the Grand Union supermarket chain, branding for the Brooklyn Brewery, and the design of New York Magazine, a publication he co-founded in 1968. Remembering Milton Glaser, Class of 1951 also features a whimsical tourism poster for the Catskills (think cats and mountains) as well as unforgettable advertisement posters for albums by Bob Dylan, comedian Dick Gregory, and more.

Following his graduation in 1951, Glaser, with several of his Cooper classmates, co-founded Push Pin Studios, a graphic design studio that helped define the modern era, before setting out on his own. He was a designer with a conscience who used his wit and visual acuity for campaigns for the World Health Organization’s Special Programme on AIDS, the Arthritis Foundation, the United Nations, among other non-profit clients. A Trustee Emeritus and former faculty member at Cooper Union, his work is also a part of several permanent collections, including The Museum of Modern Art, New York. In 2009, Glaser was recognized for a lifetime of extraordinary work when he received the National Medal of Arts from President Obama. He Glaser remained highly active in graphic design well into his 80s, and spoke about his career in The Cooper Union’s Great Hall in 2017.