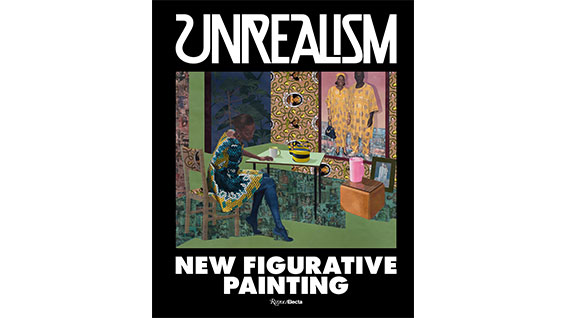 Figuration is one of the oldest art forms, but it continually evolves, along with our changing understanding of human identity. Aria Dean, Sam McKinniss, Ebecho Muslimova A’10, and Tschabalala Self discuss contemporary figurative painting of the last five years in a free, public event. Alison Gingeras moderates.

The featured artists often source imagery from the Internet, and draw on aesthetics developed in Internet-first channels. Digital techniques and affordances are incorporated into rendering processes with traditional media: brushstrokes are more precise, lines are sharper, and color is more highly keyed. In these works, expressionism is located more in the composition than in the paint handling.

This event launches Rizzoli’s Unrealism: New Figurative Painting. Copies will be available for sale by The Strand.

Brooklyn-based artist Sam McKinniss, who recently was the subject of an ARTFORUM cover story (September, 2019), has an upcoming new solo exhibition at JTT, New York, in February 2020. Past solo exhibitions include "Neverland" at Almine Rech Gallery, Brussels, "Daisy Chain" at Team Bungalow, Los Angeles, and "Egyptian Violet" at Team Gallery, New York. His work has appeared in numerous group exhibitions at Sadie Coles HQ, London, Almine Rech Gallery, New York, MASS MoCA, North Adams, Gladstone 64, New York, and others. In addition to his work in painting, McKinniss writes regularly about art for various publications. Most recently, he contributed catalog essays discussing the work of Marsden Hartley for "The Earth Is All I Know of Wonder" at the Louisiana Museum of Modern Art in Denmark, as well as on Piotr Uklański recent show "Ottomania" at Luxembourg Dayan, New York.

Alison M. Gingeras is a curator and writer based in New York and Warsaw. Her curatorial history spans the Solomon R. Guggenheim Museum, Centre Georges Pompidou, Paris, Palazzo Grassi, Venice, to East Village storefront curatorial space, Oko.  She was recently a guest curator for a new series of talks at The Drawing Center entitled “Bellwethers: The Culture of Controversy.” Her recent exhibitions include the “ Oscar Wilde Temple” a public artwork by McDermott & McGough at Studio Voltaire in London and a show that explores masculine identities in the work of John Currin in a show entitled "My Life as a Man” at Dallas Contemporary. Her critical writing regularly appears in such periodicals as Artforum, Tate Etc., Spike, and Mousse. Since 1996, she has authored scores of essays for artist monographs, critical theory compendiums, and exhibition catalogues.