Filmmaker Avi Mograbi and "Between Fences" 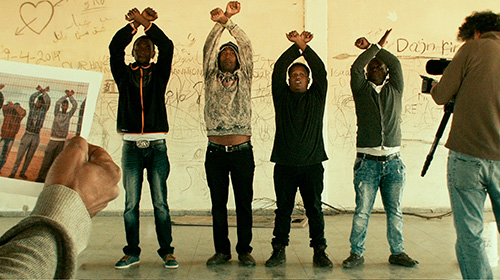 The Interdisciplinary Seminar presents a free, public screening of Between Fences (2016), a film by Avi Mograbi, followed by a discussion with the filmmaker.

In the documentary film, Avi Mograbi and Chen Alon meet African asylum-seekers in a detention facility in the middle of the Negev desert where they are confined by the state of Israel. Together, they question the status of the refugees in Israel using "Theater of the Opresse" techniques. What leads men and women to leave everything behind and go towards the unknown? Why does Israel, land of the refugees, refuse to take into consideration the situation of the exiled, thrown onto the roads by war, genocide and persecution? Can the Israelis working with the asylum seekers put themselves in the refugee’s shoes? Can their collective unconscious be conjured up?

Israeli filmmaker and video artist Avi Mograbi was born in 1956 in Tel Aviv, where he lives and works to this day. Having studied art and philosophy, he gained his first production experiences working as an assistant director on commercials and feature films, while his own filmmaking career began in 1989. Since 1999, he has taught documentary and experimental film at Tel Aviv University and the Bezalel Academy of Art and Design in Jerusalem.

Avi Mograbi's documentary films have been programmed by festivals worldwide, including: Cannes, Berlin, Venice, Rome, New York, FID Marseille, Vision du Reel and San Francisco, among others. His films include Once I Entered a Garden (2012), Z32 (2008), Avenge But One of My Two Eyes (2005)