A free, open panel discussion on the artist Donald Judd's relationship to the written word in conjunction with the publication of Donald Judd Writings (Judd Foundation and David Zwirner Books), the most comprehensive collection of the artist's writings assembled to date. The panel will include: 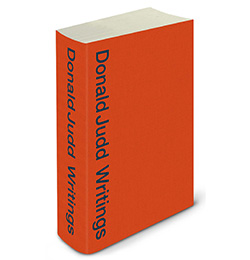 Donald Judd (1928–1994) remains one of the most significant artists of the twentieth century, whose radical ideas and work continue to provoke and influence the fields of art, architecture, and design. Born in Excelsior Springs, Missouri, and after having served in the United States Army, Judd attended the College of William and Mary, Williamsburg, Virginia, and Columbia University, New York, where he received a BS in Philosophy, cum laude, in 1953. Studying at the Art Students League, Judd began his artistic career as a painter and transitioned to three-dimensional work in the early 1960s. Throughout his lifetime, in his writings and his work, he advocated for the importance of art and the artist’s role in society. His work has been exhibited internationally since the 1960s and is included in numerous museum collections.