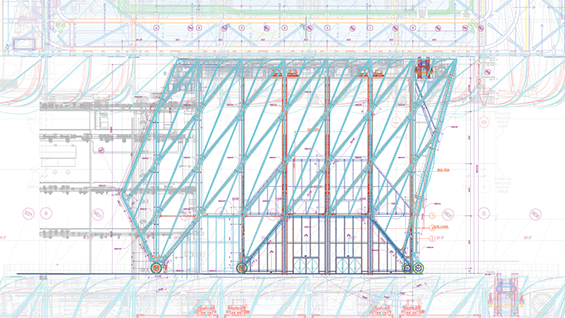 Ben Gilmartin is a partner at Diller Scofidio + Renfro (DS+R), where he has been an instrumental design collaborator with Liz Diller, Ric Scofidio and Charles Renfro since joining the studio in 2004. Ben led the design of some of DS+R’s major works, including the Alice Tully Hall and Fountain Plaza / Columbus Avenue Grand Entrance projects within the transformation of the Lincoln Center for the Performing Arts campus. He was also a design leader for the Museum of Image and Sound in Rio de Janiero, the Berkeley Art Museum and Pacific Film Archive at the University of California, Berkeley, and was a key contributor to projects such as The Broad contemporary art museum in Los Angeles, the Roy and Diana Vagelos Education Center, the Museum of Modern Art expansion, and The Shed, all in New York. Currently, Ben is Partner-in-Charge of the United States Olympic Museum in Colorado Springs, The New Health Precinct at the University of Sydney in Australia, and a collaborator on three projects in London: the Centre for Music, a new permanent home for the London Symphony Orchestra, a new Collections and Research Centre for the V&A in Stratford, and a public space network within the Greenwich Peninsula complex, currently under construction.

Ben holds a Master of Architecture from the Harvard Graduate School of Design, and a Bachelor of Arts in Architecture and English Literature from the University of California, Berkeley. He has taught at the Cornell University College of Architecture, Art, and Planning, and was a longtime contributor to the architecture journal Praxis. He has lectured widely about the studio’s work and is the current Co-Chair of the AIA New York Chapter Global Dialogues Committee. In 2017, Ben received Wall Street Journal Magazine’s Architecture Innovator of the Year Award alongside his fellow DS+R partners.

Presented as part of the Master of Architecture II Summer 2018 Lecture Series.