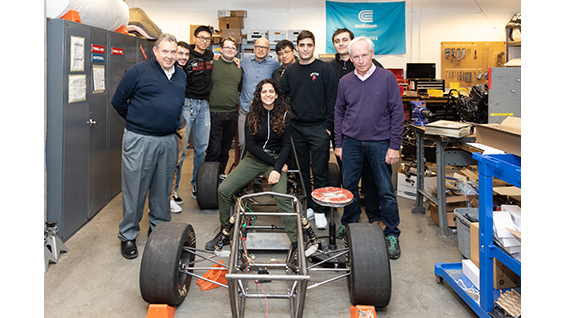 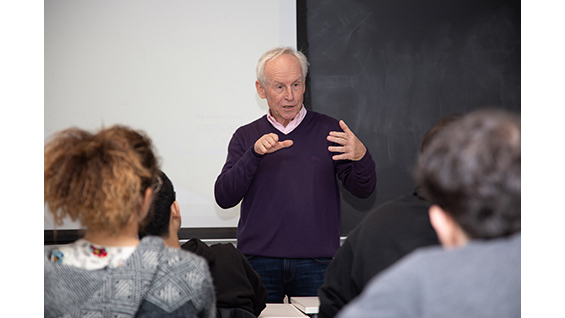 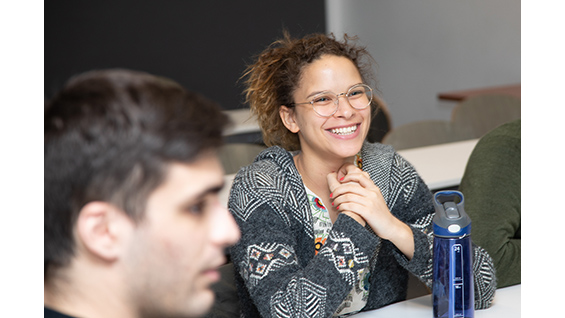 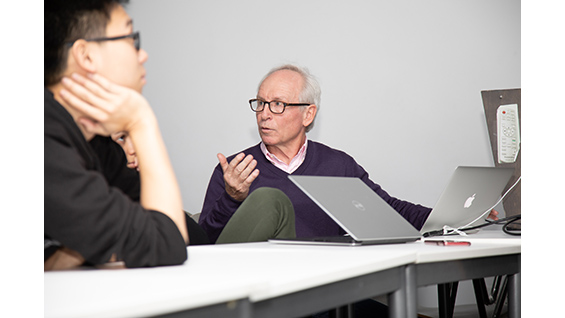 Mr. Kirkby, who has won dozens of races including the Avon Motor Magazine Tour of Britain, described critical strategies for driving an autocross course, noting that it requires a different approach from driving a race track. For one thing, he said, "you've got to come out of the track strong. The problem with that psychologically is it can make you overdrive the car."

He emphasized the importance of trail braking, a driving technique in which the driver pumps the breaks before entering a curve and then hits the gas before the curve's apex. Mr. Kirkby, director of the Lime Rock Drivers Club in Lakeville, CT, pointed out that to win a race, you want to get to a straightaway as soon as possible so that you can apply the gas. Ideally, the drivers' hands and application of gas need to be in sync.

Students were intrigued by a video Mr. Kirkby showed taken from the dashboard of a student driver on the Lime Rock course. A gauge on screen showed the driver's use of brake and gas as well as his steering angle. The group watched the video multiple times, with Mr. Kirkby narrating the driver's strengths and weaknesses.

Robert Reinckins, Cooper's interim Chief Technology Officer, has raced at Lime Rock, and thought the school's SAE team would benefit from a meeting with Mr. Kirkby. "I invited Simon to visit and speak to the FSAE team to share with them a professional race car driver's insights on what they look for in a car," he said. "Also, based upon my discussions with the team members, I saw a need for a driving instruction and getting some seat time in a race car."

The team will be traveling to Northwestern Connecticut this spring to learn more from Mr. Kirkby on his home turf at Lime Rock. They will get the chance to drive a Spec Miata racer. Mr. Reinckens, who also takes motorsports photographs at Lime Rock, is looking forward to the student visit and muses that it may result in "a few 'Lime Rockers' out of the FSAE team."