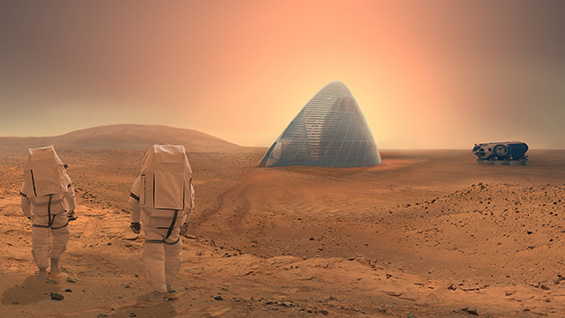 In spite of not having an aeronautics or rocket design program, since the ’60s and ’70s and the dawn of the “Space Race,” Cooper Union graduates have played important roles in designing, building, and launching the rockets and satellites that have changed the way we understand our world and the entities outside it. One early graduate in the industry is Dick Schwartz ME’57, a former member of the Board of Trustees, who worked on the lunar landings, the International Space Station, and the first launch of the Global Positioning System satellites that support our gargantuan network of smartphones and devices today. Another is Maxine Nietz CE’76, who served as mission operations controller for NASA’s Jet Propulsion Lab (JPL), coordinating communications with the Pioneer, Helios, Viking, and Voyager probes. Since then, many of our alumni have entered the field of aerospace and are applying their Cooper educations to the reimagining of the space-launch business model, whether at SpaceX, NASA, or any number of Silicon Valley startups in aerospace engineering.

Navigating the “final frontier” allows for and even requires highly innovative problem solving, which is perhaps why it appeals to so many young people. General John W. Raymond, current commander of the Air Force Space Command, recently spoke to Cooper students, faculty, and staff at the invitation of President Sparks. He noted that it takes the inexperienced, ambitious approach of a younger workforce to re-evaluate and revolutionize accepted practices in space exploration. Elihu Herskovits EE’10, for example, applied to work at SpaceX straight out of Cooper because, he says, “I believe in the goal of making humanity a multiplanetary species, and they are very serious about working toward that.” SpaceX, the Elon Musk startup, aims to disrupt space travel as we have known it by reducing the cost of launches through reusable rocket parts and increasingly automated processes. It intends to make space travel available to the general public, with the ultimate goal of enabling humanity to live on other planets. “I think it’s completely possible, completely realistic,” says Daniel Nash ME’12, who has also worked for SpaceX. “The technology is there; it’s just a matter of money and funding and commercial interest.”

To many this might seem an “out there” aspiration, but a number of Cooper graduates working in aerospace take the premise seriously. When asked how he himself would feel about being in space, Nash replied: “I don’t think of [becoming an astronaut] as the pinnacle of my work, like an

Eagle Scout badge. It just would be very cool and is becoming increasingly possible. We’ve carved our own niche in the universe and it is an entirely human thing. Everything we do in space is made possible by human technological achievement; you’re the next stage in human evolution, doing something nature never intended you to do.”

Michael Morris, who graduated from The Irwin S. Chanin School of Architecture in 1989 and currently teaches as an associate professor here, is moving toward that next stage. Space Exploration Architecture (SEArch+) is Morris’ research group, created to “conceive, investigate, and produce innovative ‘human-centered’ designs which enable human beings to not only live, but thrive in environments beyond Earth,” according to its website. Based on a lightweight infrastructure easily erected by robotic equipment, the Mars Ice Home uses materials readily available on the planet (ice and carbon dioxide) to create a habitat for Martian explorers. In 2015, SEArch+ was chosen by NASA to collaborate on the development of the habitats our astronauts will actually use in the first manned exploration of Mars. 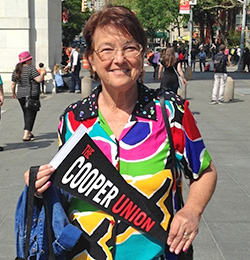 Maxine Nietz (left) credits her Cooper education with giving her the fortitude to seize opportunities like the one at the Jet Propulsion Lab (JPL) that led to her becoming a mission operations controller: “My education prepared me for almost anything. It made me open to learning new things, understanding the technical sides of things, being adaptable, following through on projects.” After moving to Southern California, Nietz answered a newspaper ad for a job at NASA, where she first worked as a negotiator, a job involving managing communication between distinct satellite operations. She eventually worked as a mission operations controller, monitoring data from spacecraft and ensuring that communication methods remained sound throughout a mission. “It’s 24-hours-a-day shift work, and I was the first woman ever to do that. We were getting ready to track the Voyager spacecraft, and I guess the other controllers were flustered because after we set up our download, they called in and said, ‘Was that really a lady just now?’”

Several alumni we interviewed for this story noted the lack of female engineers in aerospace. The Cooper Union is fortunate to have many women in leadership positions in the Albert Nerken School of Engineering, including Anita Raja, associate dean of research and graduate programs; Andrea Newmark, chemistry chair; and Melody Baglione, the current George Clark Mechanical Engineering Chair. Recently, Cooper hired two women assistant professors of chemical engineering (see related story on page 10), one of whom, Amanda Simson, studied aeronautics and its history as an undergraduate. “My experience as an undergraduate was seeing between two and five women per year out of 20 students. There were classes with only one woman in a class. At Boeing [one of Simson’s previous employers] there were 40 people on my team, and only one woman besides me, and I was a temporary co-op.”

While the school of engineering offers classes in rocket science and aerodynamics, among other related disciplines, The Cooper Union does not currently have a major in aeronautics. However, this seems to have helped rather than hindered most alumni interested in the field. “Aerospace is a very multi-disciplinary field, and the best engineers know a little about everything. Mechatronics or an equivalent course promotes interdisciplinary understanding and gives you exposure to working on a team with people who have a potentially overlapping, but fundamentally different, set of skills,” Nash says. Mechanical engineering senior Samuel Lee, who has interned at the Air Force Research Lab at Eglin Air Force Base in Florida, notes that “the rigor of the fundamental courses here, namely the math and fluid mechanics, has helped me become accustomed to tackling complex concepts.”

When asked how Cooper students can best pursue a career in aeronautics, many alumni emphasized the importance of electives and internships. Dr. John Hennessy EE’02, a technologist at NASA’s JPL, says that “no matter what engineering area you are in, you can steer your elective focus toward specialties in aerospace. Identify a path for the things that interest you and are relevant for the aerospace programs you find most interesting. JPL and most NASA centers have robust internship programs with a wide cross section of disciplines.” 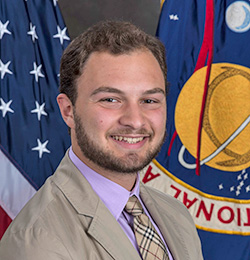 Current Cooper students are already taking advantage of many of these opportunities. Mechanical engineering senior Ben Greenberg (at right) spent last summer working for the Marshall Space Flight Center in Huntsville, Alabama. “The program I was in—the Space Hardware/Robotics Academy—took 13 students. We made additions and improvements to a simulator for a single-person spacecraft, which is intended to take the place of the traditional spacesuit on deep-space missions.”

On a more personal note, Schwartz stressed the importance of setting high standards when working in the field. “You’ve got to have a very high requirement for quality in what you do. You launch a satellite: you kiss it goodbye. You’ll never see it again. So it better be in good shape when you let it go. I tried never to bring my work home, but one day my wife saw I was a little nervous and I told her, ‘That satellite has 30,000 parts on it, and if one of them fails it will be because I did a lousy management job.’”

For current SpaceX employee Spyros Korsanos ME’13, the many opportunities to work on immersive projects at Cooper were key to their work in the field. “Hands-on projects not only give you a practical understanding of how all that class work is applied to something real, but more importantly they are the easiest way to differentiate yourself from your peers: every hands-on project is unique and faces unique challenges. At Cooper, the Formula race-car team helped me understand (among many other things) how a complex team interacts to solve a problem and how that problem can have multiple ‘right’ answers, but only a few that will actually work.” Korsanos also attributes his own high standards for personal and group achievement to his education at Cooper. “SpaceX challenges its employees with not just doing their best, but finding out what their best work is and doing even better; finding out where your limit is and then going beyond that. That’s something that I don’t think I could have found at any college other than Cooper Union, under the mentorship of my professors there, and I’m grateful for that.”