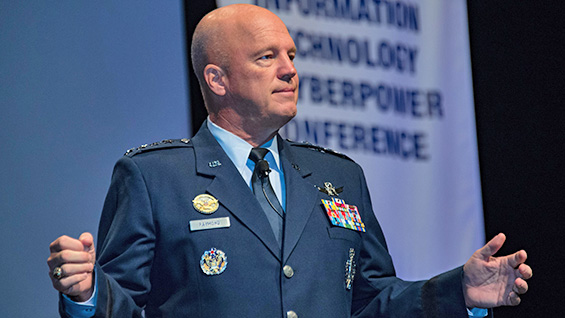 On October 17, 2017, General John W. “Jay” Raymond addressed an at-capacity Rose Auditorium audience about the Air Force Space Command, where he is commander. Located at Peterson Air Force Base, Colorado, the Air Force Space Command provides resilient and cost-effective space and cyberspace capabilities for the nation. In this role, he is one of the highest-ranking uniformed officers in charge of space for the Air Force and the Department of Defense. He is responsible for organizing, equipping, training, and maintaining mission-ready space and cyberspace forces and capabilities for the North American Aerospace Defense Command, the U.S. Strategic Command, and other combat commands around the world.

General Raymond met Laura Sparks at a leadership conference a few years ago.
This fall, she invited him to campus to hold a discussion with students and faculty about popular topics such as space exploration and cybersecurity. General Raymond also had lunch with a small group of faculty and students, including mechanical engineering sophomore Connor Lowry, who were interested in his expertise.

“As someone who intends to work in the aerospace field, I thought the opportunity
to talk to General Raymond would give me the best insight into the future of the field,” Conner says. “I think the biggest takeaway from the talk is that the future of space exploration requires cooperation across the entire world. If we want to expand our horizons into orbit and beyond, the nations of earth need to be responsible for not only the launch of their vehicles, but also any debris that unavoidably ends up in space. That being said, the general was hopeful for the future; since entering this position he has found that level of cooperation throughout engineering across the world.”