Despite myriad challenges and disruptions, this year’s highlighted seniors from the School of Art—Vyczie Dorado-Lopez, Kian McKeown, and Sydney Vernon—found that quarantine had one serious advantage: it provided ample time to both make work and reflect on their art. We spoke to them as they were winding up their four years at Cooper, asking them to reflect on how their practice has changed and how they’ve grown while at Cooper. 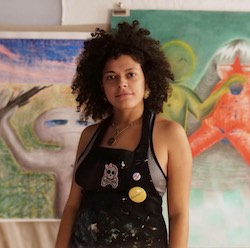 Vyczie Dorado-Lopez came to Cooper from her home in Orlando, Florida where she’d been accustomed to the structure and exchanges provided by many family members. Arriving in New York was initially an unnerving and isolating experience. But those first days at Cooper were well documented thanks to a series on the school web site entitled Week One, in which a writer from the communications office shadowed one student each from the three schools. Vyczie represented the School of Art and over the years she’s been able to compare her current self to the young woman depicted in that article.

“I’ve gained and lost friends and have grown from all these relationships and am very happy to be the person I am today and excited to continue to grow, in or out of school. But I am not alone in this growth, that’s thanks to all the people that supported me through the years and helped me through every challenge because college is more than what’s happening in school.”

The pandemic was a period of great professional growth for Vyczie who has been featured in several group shows over the last year. “I become more aware of what I want in my work and though critics are good, kind of become distracting as I’m keeping in mind everybody’s notes.” It also had a direct impact on the content of her art, which is frequently about hereditary illness. The pandemic prompted her to think about what she calls "the internally handicapped body" and its relationship to gallery space. In her 2D work, genderless figures are adrift in pale, dreamy landscapes, lost in thought and weighted by this genetic heirloom. Her performance and video work, she says, "push the gallery space to acknowledge and accommodate these bodies" both in virtual and physical spaces.

In addition to being exhibited in a number of group shows, she was awarded the prestigious Ox-Bow Summer Art Residency affiliated with the School of the Art Institute of Chicago for 2020, but the program was cancelled because of COVID-19. She will participate in an abbreviated version of the residency this year. Eventually, she plans to attend Yale for graduate school, but first wants time to process all she’s learned and keep the extraordinary momentum of the past year going.

She’s quick to point out that her successes have been part of a community effort—and she’s grateful. Particular props, she says, go to professors Jessica Dickinson, Franklin Evans, Simon Liu, and Will Villalongo, citing their useful critiques and their generosity with resources both material and emotional “Those of you that helped me out, I am very grateful for you all. You have made my experience brighter and allowed me to flourish in this rough city.” 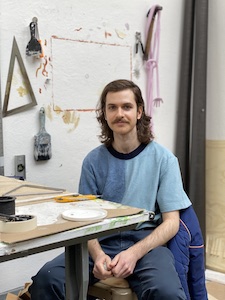 Kian McKeown grew up in New York, so the culture shock that newcomers often experience wasn’t part of his introduction to Cooper. Instead, he says that he found himself in a community that felt more relatable than any he’d experienced in school before. ”I felt I finally found people who I could be myself around. Over time, I think I have become more comfortable with being social and outgoing. Having access to shared studios definitely contributed to this because it allowed all the art students to develop a community outside of class.”

His work has changed substantially over his four years at Cooper, most notably in the materials he's come to work with in large part due to a 3DD class with Adriana Farmiga. While initially he primarily used wax, silicone, and hair, he now tends to use plaster, paper mâché, wood, and paint. He also began to include motors as part of his sculptures. ”I started using motors in order to add moving elements to my sculptures. It was a tricky process to learn how to use electrical components, but I had a lot of help from the shop technicians and I was really excited to have new options for future work.”

For his senior show, Kian was able to exhibit his fascination with tromp-l'oeil. ”I titled the show look both ways because most of the work deals with certain characters or scenes existing within contradictions or conflicting states.” Much the same could be said for his sculptures of musical instruments that appear to be growing from a wooden plane, caught between raw material and completed, three-dimensional object. ”I started using trompe l’oeil as a tool to point to the voyeur as it tends to be a pretext for seeing or sensing more than appearance presents. This was possibly meant to be manipulative, but more so seductive in that each piece commands the viewer to consider and question its intentions.”

During the summer of 2020, Kian decided to take his professors’ advice to start your own projects or exhibitions: he organized a group show for friends from Cooper called “Tree Show.” The idea was simple—a picnic in Central Park with art works hung from trees—with the goal of creating community around showing art at a time when exhibition opportunities were rare. The show was a success. Right after graduation, he plans to organize another where art works will be shown on small boats floated on a pond or lake.

Eventually, he plans to go to graduate school, but in the meantime, he’ll be continuing his art practice on his own. “I’ll have to get used to working outside of school, and without shop and studio access, but seeing as I was able to adapt during quarantine when I couldn't leave my apartment, I’m hoping it won’t be too difficult.” 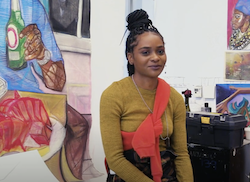 Cooper took Sydney Vernon in an unexpected direction: when she arrived in Fall 2017, she planned to study film with the ultimate goal of founding a production company. As it turned out, she took few courses in video and instead focused on drawing and painting. She also studied printmaking, photography, painting as video, and performance.

Much of the work she made found its way into group shows as well as her first solo exhibition entitled Sydney Vernon: When We See Us, at Thierry Goldberg Gallery. In 2020 she was one of several artists who won the Brooklyn Museum’s collaboration with Instagram called #Your2020Portrait, which called for work from portraits in any media made by college students. Sydney’s winning entry, "Former Men" is a deeply moving portrait of her father enjoying a lobster dinner. Taken from a photo, the picture makes reference to the Vanitas paintings of 17th century Dutch artists, as well as to Kerry James Marshall's seminal work, Portrait of the Artist as a Shadow of His Former Self, a rendition of which she included in charcoal and just barely visible through a darkened window pane over her father's shoulder. "After completing most of the composition, I realised that I wanted to include a reference to the black art historical tradition....I felt like I was honouring two traditions of painting while simultaneously writing my familial lineage into art history."

Based on photographs of family and friends, her artwork is at once personal, cinematic, and self-conscious about the act of looking and its corollary, self-presentation. To that end, her drawings and paintings frequently include traces of armatures used for measurement and perspective, palimpsests of the artist’s hand. She inserts what she calls "Easter eggs"—shadow paintings or drawings that make reference to history and art, as with Former Men.

In November 2019, Sydney told Art of Choice: “I’m really interested in sharing histories through a personal lens rather than reinforcing ‘textbook histories’ that generalize and skip over the specifics of everyday life. I often sift through my family photos and consider the larger climate of the world in those moments. The photos have the ability to directly capture a specific moment as it relates to my family and indirectly reference the world condition that surrounded it’s making.

Though disappointed that Cooper had few classes in Black art history, she took a class during her sophomore year entitled “What Is Post-Black?" with Nana Adusei-Poku, which she said offered a comprehensive history of Black art. She still refers to that course's syllabus as a touchstone as she works to combine familial and historic narratives; it's important to her that everyday experience be a part of the telling of history. "What you get, is the mixing of the universal and the personal....A lot of people have their references, most of them are white. I try to shake up the pool of what people are pulling from. I don't think a lot of people are interested in diversifying their knowledge unless there is pressure to."

Sydney plans to take a year off before attending an HBCU for graduate school.