Imaginary Monuments to an Invisible War

The world premier of a touring group exhibition that looks back to another time while loudly resonating with current geopolitical events has opened in the 41 Cooper Gallery until November 7. Monument to Cold War Victory showcases works, many of which have never been seen before, representing the finalist proposals submitted to a provocative competition for the titular monument. The exhibition originated in 2010 as a single conceptual work when artist Yevgeniy Fiks wondered what shape such a monument to such an elusive and unstable historical phenomena as the Cold War might take. Together with Stamatina Gregory, associate dean of the School of Art, he issued a call for proposals in 2012 to the international artist community. The exhibition brings that work of conceptual art into physical form. 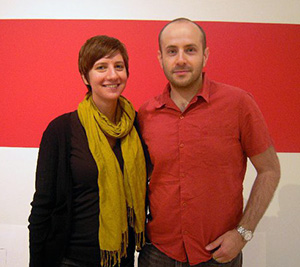 "More than anything this idea is a provocation," Fiks, at left with Gregory, a native of Moscow and an artist whose practice explores themes of the post-Soviet dialog in the West, particularly the U.S., says. "I'm not interested in commemorating the Cold War as a historical era that is over and is comfortably situated in history books. It's very much about being an incomplete war, a war that never ended. I wanted to problematize the legacy of the Cold War and show that it is unresolved. If it was a war then why don't we have a monument? What was the outcome?"

"We were a little bit vague and also a little specific," Gregory says about the proposal that went out via e-flux, a publishing platform used by thousands of international artists, "We pointed out in our proposal that there is no public or publicly commissioned monument to the Cold War in the United States more than a decade after the collapse of the Soviet Union." So they commissioned proposals for precisely that, under the bureaucratic-sounding name of their notional institution, The Committee for Tacit History. "We explicitly expressed that we were interested in monuments that redefined in contemporary terms what the monumental looks like--and how visible or invisible monumentality might be-- and what it signifies now," Gregory says. "Implicit in our proposal, because we purposely elided any reference to a specific site or budget, was an invitation to utopic, dystopic, or otherwise implausible projects--as well as projects rooted in social engagement. And that message seemed to get across to many of the artists and architects who submitted projects."

The organizers received almost 200 proposals that were then vetted by a jury of five artists, thinkers and curators who picked 17 finalists. The current show is comprised of physical manifestations of those proposals. Why 17? "We originally thought maybe we would have 10 or 12," Gregory says. "Up until this moment it was really a conceptual project. And at the point at which the finalists started to comprise the actors in an exhibition we felt that in order to accommodate the needs of the exhibition we had to include enough diversity of formal and methodological approaches, and of perspectives and regions. So 17 wound up being our magic number."

Proposals in the show take the shape of everything from a scale model of an ironically colossal monument to Ronald Reagan (by Dread Scott) to such less obviously monumental works such as a shipping crate, an office, a small sculpture, a radio station, video, and more. One proposal, by the Hungarian artist Szabolcs KissPál, takes the form of a large wallpaper showing the Hollywood sign augmented to read, "Hollywood Ten," a reference to the producers, screenwriters and directors blacklisted in 1947. "Some of the jury felt it was a little bit of a one-liner but its simplicity is profound," Gregory says. "This is a landscape that is very known in the public imagination. So the proposal is about making visible something that is nominally invisible and acknowledges Hollywood as a key disseminator of ideology at the height of the Cold War."

Yuri Avvakumov, a Muscovite architect, submitted a proposal to reconstruct one of the wooden platforms, now all destroyed, that used to sit on the west side of the Berlin wall. West Berliners and tourists could peek over the top to see the guards, dogs and electric fences installed by the East German government. In the exhibition the proposal takes the form of a blueprint for the platform that visitors can take away with them.

The exhibition has several related events including a panel on October 29 that will explore the production of artwork and the concept of monumentality in the context of recent geopolitical events between the U.S. and Russia. There will also be a panel on November 7 on "State Secrets," organized by Dolsy & Kant Smith A'07, two brothers whose proposal for a traveling van staffed by an expert in filing Freedom of Information Act requests is in the exhibition. They will also host a workshop on filing FOIA requests on November 6. All events are free and open to the public.

The show will move to the Wende Museum, which preserves Cold War artifacts, in Culver City, Los Angeles in 2016. The organizers are in discussion with venues in Washington D.C. as well as Europe.

The original call for proposals promised that there would be a finalist and that his or her proposal would be realized in some shape or form. But recent changes in U.S.-Russian relations due to the ongoing conflict in the Ukraine have made the exhibition's questions highly contemporary and have changed the organizer's thinking about its final outcome. "I think we will have a clearer vision of the direction once this show closes," Fiks says. "The programming related to this exhibition will generate more discourse on what should be the final point of this project." Stamatina Gregory concurs. "In all our materials it clearly states that this is an ongoing conceptual project by Yevgeniy. And all these materials are manifestations of that project. It's an exhibition but it's also a single artwork with a long life."