Learning to Draw, Drawn to Teach 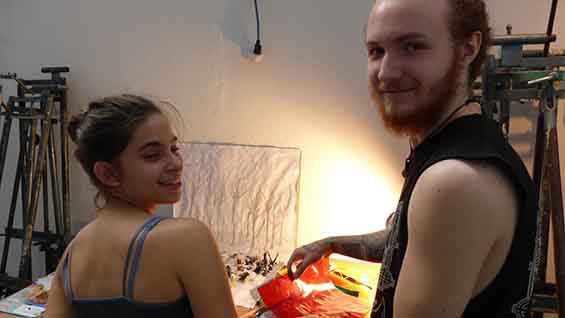 When I first learned about the Outreach Program at Cooper Union I had little faith in my drawing abilities—mostly because I wasn’t able to make “realistic” drawings. I dreamed of being able to represent the real world through drawing or painting, but I was convinced that the Cooper Union was only for people who could already accomplish this task. Though I was discouraged, but I just went for it—I had heard so many great things about the school.

One week, later, to my surprise, I was accepted. And after the first week of classes, I was hooked. I had never experienced such deep intellectual discussion—or such conceptual assignments—in my public school in upstate New York. I formed an instant connection with both the professors and student teachers, who were extremely hands on and down to earth. At that point, I knew that not only did I want to attend the Cooper Union School of Art, I also wanted to be involved with this program that helps students realize their artistic potential.

After Outreach, I ended up devoting all my time and effort to the Cooper Union. Getting to know the professors and students, and keeping in touch with them, was a life-changing experience. After attending as many portfolio days as possible and completing the home test, I received my early decision acceptance. Without the Outreach program, I would not have known about this wonderful school—or how to prepare for the college application process—and the “adult life” and expectations of college itself.

At the end of my first year, I felt knowledgeable enough to start sharing what I know with high school students who used to be in my position. I got to know the talented people who run the program and soon enough I had my students! Teaching high school students new things and getting people interested in art has been the most fulfilling opportunity I have had. Now, I can't imagine my life without it.

Connor Filiardo is a 2nd year student in the School of Art at The Cooper Union. The Cooper Union Summer Art Intensive shares its director, staff, and faculty with the Outreach program, which has been preparing New York-area high school students for undergraduate art admissions for 23 years.