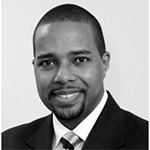 Mr. Malcolm King EE'97 was elected to the Board of Trustees in 2013 and was elected Chair of the Board in 2020. He previously chaired the Audit Committee and also serves on the Free Education Committee (FEC) that issued the plan to return to full-tuition scholarships that was ultimately approved by the board and now monitors progress toward the plan's objectives.  Mr. King is a co-chair of Cooper Union on Wall Street (CUWS), an alumni group that supports the school through fundraising initiatives and provides guidance to students and alumni interested in careers in financial services.

He is currently head of Cybersecurity Risk & Control at Wells Fargo. Previously, he served as a Managing Director at State Street Bank in the Corporate Information Security department. He also contributes to cybersecurity industry groups, providing guidance for regulatory compliance and best practices.

Mr. King was also an Executive Director with Morgan Stanley in Technology Information Risk.  He joined Morgan from Citigroup, where he spent thirteen years in information security and trading technology. He began his career at Federal Express as an engineer in the Information Security division.

Mr. King grew up in Brooklyn, NY, attended Stuyvesant H.S., and received his BE in Electrical Engineering from Cooper Union in 1997. He currently lives with his wife and three children in South Orange, NJ.