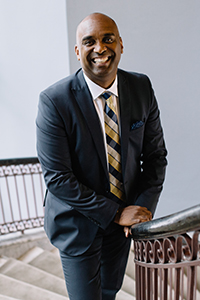 At Emory, McBride has been an instrumental force in the university’s strategic framework, One Emory: Engaged for Impact. Launched in the fall of 2018, the framework prioritizes faculty excellence, a compelling student experience, and leveraging the connection between Emory and Atlanta, a global city. The Office of the Provost has hosted the Faculty Impact Forums, designed as a mechanism for regularly convening faculty across the enterprise to stimulate interdisciplinary faculty connection, an Interdisciplinary Humanities Conference (supported by the Andrew W. Mellon Foundation), and initiatives for faculty, students, and staff to foster innovation and entrepreneurship

McBride came to Emory in July 2017 from Northwestern University, where he served for 7 years as Dean of The Graduate School and Associate Provost for Graduate Education, as well as the Daniel Hale Williams Professor of African American Studies, English, and Performance.   McBride was on the Northwestern faculty previously as the Chair of the African American Studies Department from 2002 to 2007. Just prior to returning to Northwestern University as Dean and Associate Provost, he served as Dean of the College of Liberal Arts & Sciences at the University of Illinois at Chicago (2007-2010).  He also served previously on the faculty of the University of Pittsburgh.

A leading scholar of race and literary studies, he has published award-winning books, essays, articles, and edited volumes that examine connections between race theory, black studies, and identity politics.

Why I Hate Abercrombie and Fitch: Essays on Race and Sexuality, a collection of his personal essays offering contemporary cultural criticism, was a nominee for the 2006 Lambda Literary Award and the 2006 Hurston-Wright Legacy Award. In 2005, McBride garnered the Best Special Issue Award from the Council of Editors of Learned Journals for the special issue of Public Culture he co-edited titled "100 Years of the 'Souls of Black Folk': A Celebration of W.E.B. DuBois." He is the editor of James Baldwin Now and co-editor of a special issue of Callaloo: A Journal of African-American and African Arts and Letters titled "Plum Nelly: New Essays in Black Queer Studies." Both works received special citations in 2000 from the Crompton-Noll Award Committee of the Modern Language Association for their significant contribution to LGBT studies. McBride's other works include Black Like Us: A Century of Lesbian, Gay and Bi-Sexual African American Fiction, a co-edited volume that earned the 2002 Lambda Literary Award for best fiction anthology, and Impossible Witnesses: Truth, Abolitionism, and Slave Testimony, also nominated for the Hurston-Wright Legacy Award.

Most recently he has co-edited the posthumous books of two colleagues: Lindon Barrett’s Racial Blackness and the Discontinuity of Western Modernity and Vincent Woodard’s The Delectable Negro: Human Consumption and Homoeroticism within US Slave Culture, which also won the Lambda Literary Award. He is co-editor of the annual journal, the James Baldwin Review, co-editor of the New Black Studies Series at the University of Illinois Press, and is currently completing a new book on Phillis Wheatley and her critics.

McBride received his undergraduate degree in English with a certificate in African American Studies at Princeton University. He earned his MA and PhD in English from the University of California, Los Angeles.