Cooper Union’s annual End of Year exhibition is currently open to the public, presenting the most rigorous and innovative work of its students. On view through June 9, 2012, the exhibition showcases advanced and critical work in science and art. This year's exhibition brings together a rich array of industries, aesthetic paradigms, and design strategies, emphasizing the kind of interdisciplinarity that makes Cooper Union a seedbed of creativity. 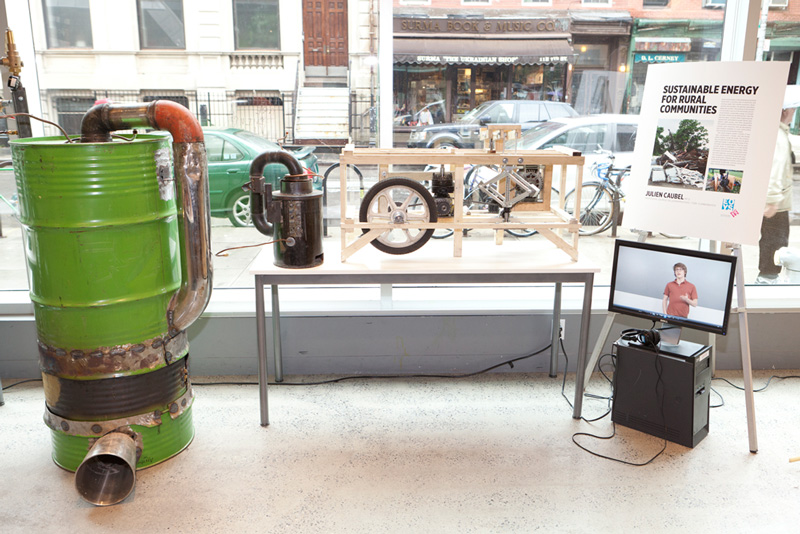 Entering the lobby of 41 Cooper Square, one encounters a number of display posters, video monitors, and engineering prototypes installed by student teams from the Albert Nerken School of Engineering. The projects on display range widely in their scope and industry potential. On the first floor is a prototype steam-engine design built from recycled materials that turns bio-waste into mechanical energy. The work is by Julien Caubel, a 2012 Fulbright winner who will journey to Ghana to elaborate this research project. Caubel focuses on developing sustainable power for rural African communities and his engine design could potentially power any number of infrastructural systems from water pumps to electric generators.

Nearby and also on the first floor is a project intended for a domestic market: a novel football helmet design , incorporating new sophisticated padding material with the potential to absorb increased crush pressure on impact. The project is the work of Sean Davis and Shaun DeVitt, who taught themselves finite element modeling in order to simulate tests of their design. 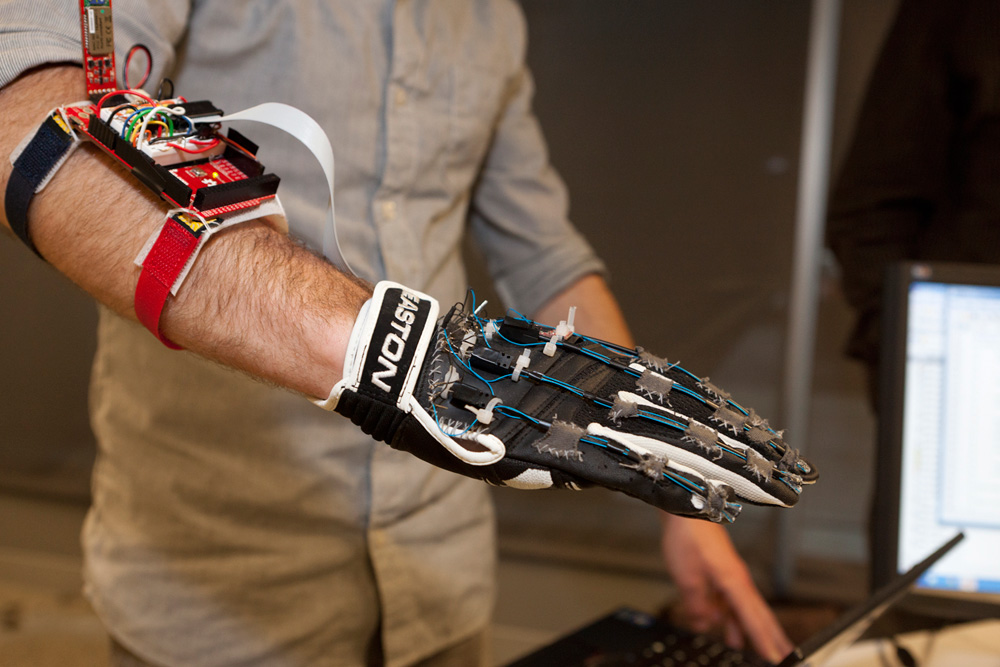 Another wearable product on view is designed to advance technical accessibility for users with special needs. John Hawk and Nicholas Rotella have developed their project, the Gestural Language for Operations in Virtual Environments, or G.L.O.V.E. Interface (above), as a new system for the interpretation and transcription of sign language. Their product allows speech-impaired people a new and easier way to interface with machines by enabling computers to process, interpret, and record users who sign.This project, like Davis and DeVitt’s, required the students not only to engage their own engineering backgrounds but to think outside of their discipline and teach themselves new skills: Hawk and Rotella learned American sign language in order to design and test their invention. 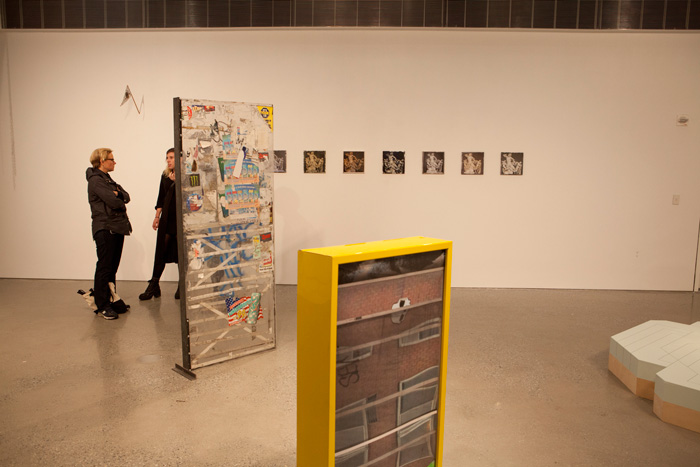 Descending one floor to the 41 Cooper Gallery, visitors enter Cemetery, a group exhibition of work from the School of Art curated by 2012 graduate and Gelman Trust prize winner Lucas Moore. The work Moore has selected for the exhibition takes its cues from the logic of the disposable—the used or discarded commodity appears reanimated in the second lives offered in works like Tory Thornton’s archeological bodega display unit (above, left) or Christian Hincapie’s salvaged material paintings. Kylie White's steel sculpture meanwhile mimes its modernist predecessors while its leaning posture against the back wall suggests something aloof, casual. The sculptures dominate the show, filling the center of 41 Cooper Gallery much like tombstones fill a plot of land—bringing a moody and uncertain close to a tumultuous school year.

Over in the Foundation Building, two groups of art students have organized two exhibitions responding to debates about introducing tuition to Cooper Union. On the second floor landing, the collaborative show Divide and Compromise offer narrative posters and a series of sculptural tableau presenting parody, criticism, and reflection on the school’s administration and discourse relating to its financial crisis. 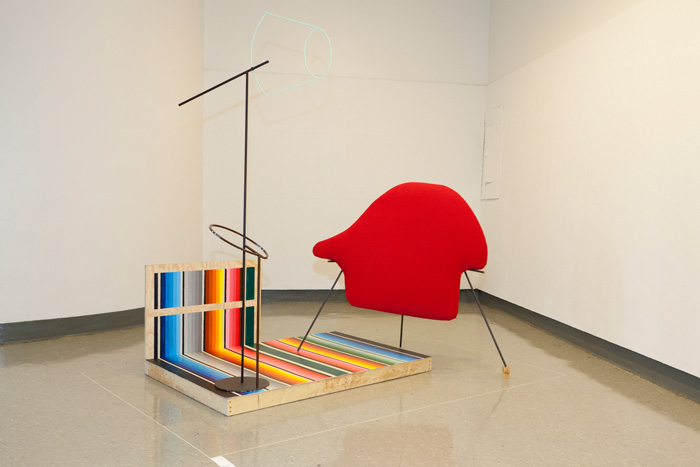 On the fifth and sixth floor meanwhile, art students offered hundreds of works as gifts to the public during the opening on May 21, in an exhibit titled Free as Air and Water. Students used the exhibition as a kind of performance, to underline their concern that Cooper Union will be charging tuition to graduate students, and has been considering changes to its full-tuition scholarship policy for undergraduates.  Anyone interested in a piece could take a corresponding "tag" and redeem it for the artwork at one of two designated packing stations where student workers would wrap the piece for the taking. Once the works were removed, faint pencil tracings of the missing pieces became visible, marking the place where the artworks had previously been displayed and foregrounding their absence. 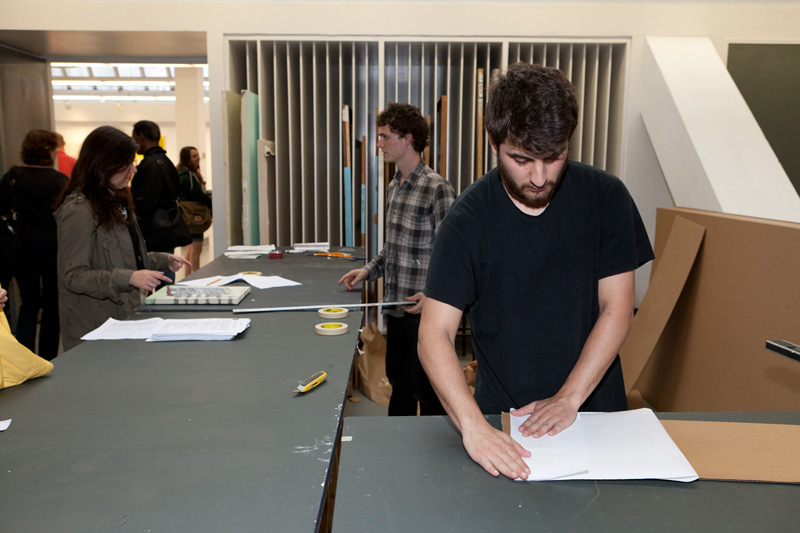 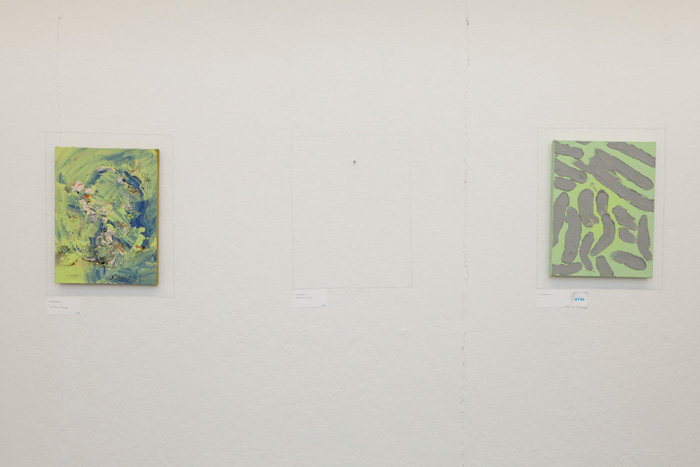 The response to the tuition debate was also reflected in the exhibition from the School of Architecture students, presented on the third floor landing and studio spaces, as well as the Houghton Gallery on the second floor of the Foundation Building. Dean Anthony Vidler wrote in his introductory essay that the work was focused on “demonstrate[ing] by the quality of our work that the school is worthy of rescue.” Rather than departing entirely from the usual thesis exhibition format, this year’s architecture exhibition focused on frugality of realization while adhering to the presentation of thesis projects by graduating seniors as well as projects by individual studio classes. 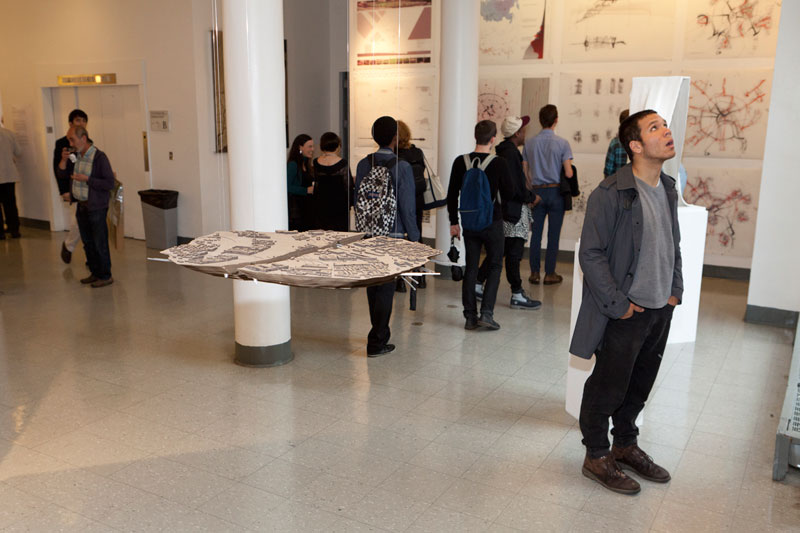 In his text, Dean Vidler framed the show in terms of the radical localism implicated in truly global thinking—counter, of course, the universalism that runs through much of Enlightenment thinking through modernism. The work on display, Vidler explains, highlights the research and reflection demanded when architects work in any new context, emphasized especially in what he called the “fragile contract between human settlement and the environment.” 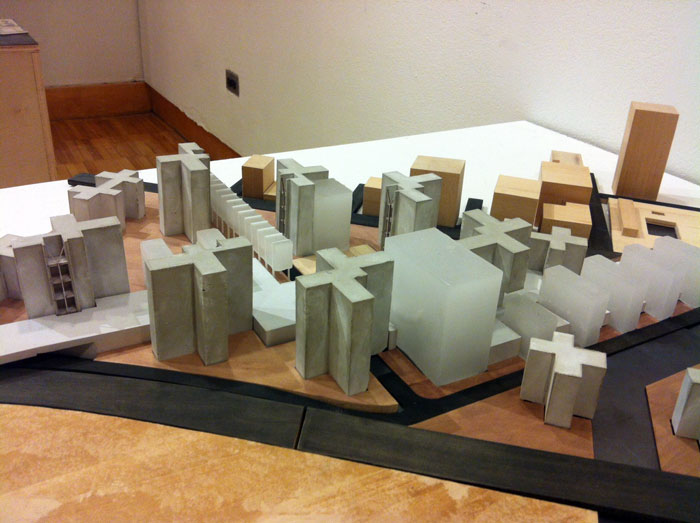 Design studio students in their first through fourth years respond to contexts and topics set by professors. Fifth year students meanwhile have a full year research and design studio as well as the opportunity to identify a problem field—local or global—especially susceptible to architectural intervention at different scales. Studies this year ranged from a theoretical rethinking and study of the demilitiarilized zone between North and South Korea by Jae Won Chang, to Mark Thompson’s proposed renewal of the Lower East Side’s Jacob Riis Housing projects (pictured above), intended to catalyze ongoing diversification into the projects rather than remodel or expand them. Also on display was Pamela Cabrera's study of historical and event time on the development of Lima, Peru. Inspired by the South American city's longitudinal coordinates as well as its pre- and post-colonial history, Cabrera's design propose three structures that would allow visitors a chance to critically engage with the temporal fabric of the city and site.