A recent New Yorker cartoon showed Greta Thunberg as Prometheus, bearing the world on her shoulders with the caption “Somebody’s got to do it.” At Cooper, two students have taken on the same challenge. Alisa Petrosova, a junior in the School of Art, and Sophie Schneider, a senior in the Albert Nerken School of Engineering, decided to organize Cooper Union x Climate Week, a series of events designed to raise the consciousness of the school community about the urgency of the climate crisis, which included participation in the September 20 Climate Strike. 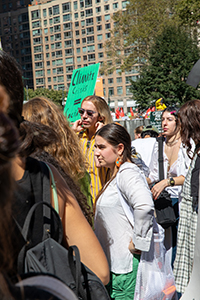 Working with Amanda Simson, an assistant professor of chemical engineering, the two students spent six months organizing the week; it started on September 17 with a lecture by acclaimed author Naomi Klein, whose most recent book, On Fire: The (Burning) Case for a Green New Deal, addresses the climate crisis. A packed audience in the Great Hall listened to Ms. Klein in conversation with activist Varshini Prakash. Another night, noted author and environmentalist Bill McKibben took to the Great Hall stage to have an insightful discussion with Dr. Ayana Elizabeth Johnson, a marine biologist and policy expert. They discussed the histories of climate revolutions—including scientists who had determined the dangers of carbon emissions long before our era. (Both events can viewed on Cooper’s Youtube channel, youtube.com/ cooperunion.) Of course, Cooper’s own faculty is deeply engaged with these questions, so it was fitting that one of the week’s final events included a discussion among Fia Backström—artist and new member of the Cooper art faculty—artist Gabriela Salazar, and Omar Berrada, an adjunct instructor and co-coordinator of the Intra-Disciplinary Seminar Lecture Series. The three discussed why issues related to the ensuing crisis are central to their practice.

For Alisa and Sophie, the week’s events were only an opening salvo for motivating substantial change at Cooper. For one thing, they would like to see the curriculum of all three schools better address the impact of global warming. Although both women became activists as a result of classes they took at Cooper, they feel that too few courses address the problem. Alisa would like to see more students have the chance to understand the urgency of the crisis. She said in one of her classes she learned a terrifying message: “Many important things would be ending within my lifetime—bees, clean water, relative peace, and the luxury of complacency.”