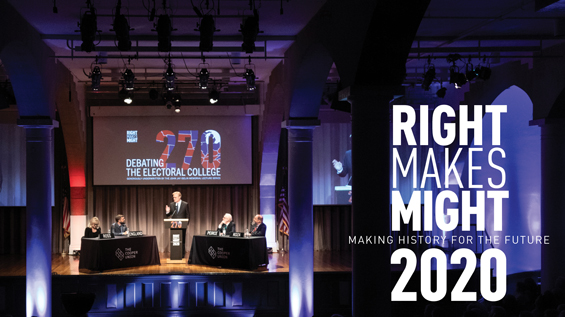 The Great Hall of The Cooper Union has stood for more than 160 years as a bastion of free speech and a witness to the flow of American history and ideas. When the hall opened in 1858, more than a year in advance of the completion of the college, it was the largest public gathering space in New York City and quickly became the destination for all interested in serious discussion and debate of the vital issues of the day.

It was here in 1860 that Abraham Lincoln, then an unannounced long-shot candidate for president, made an impassioned argument against the expansion of slavery, entreating his audience to “have faith that right makes might.” That powerful Great Hall speech marked a turning point in the election and propelled Lincoln to the White House.

Heading into the 2020 U.S. presidential election, The Cooper Union is hosting a series of Great Hall events inspired by the political courage and moral vision of Lincoln’s “Right Makes Might” address. Through free, public programs that address (or surface) the questions we should be asking as citizens of our democracy, the aim of Right Makes Might is to authentically engage the public, beyond the Great Hall’s live audience, inspiring people to thoughtfully contribute to and consider some of the most significant issues of our time.