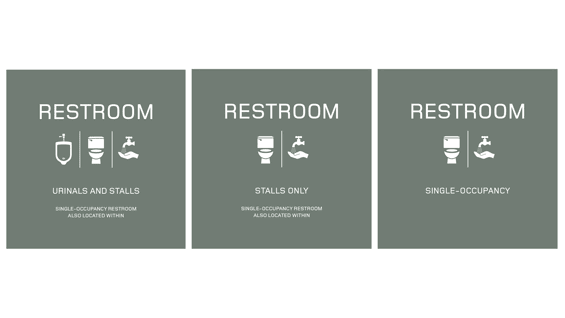 On March 18, Bill Mea, acting president of The Cooper Union, sent the below email, entitled, "An Update on a Proposal for Our Community," to the campus.

In December I circulated the email below, "A Proposal for our Community," and asked for your feedback. Since that time, I heard from many of you, both personally and in writing. I have also considered an NYC law requiring us to post the following sign on all single-sex restrooms: “Under New York City law, all individuals have the right to use the single-sex facility consistent with their gender identity or expression.” Lastly, I have deliberated with myself and others the response that is right for our community today and in the future.

I thank our students who raised the issue of gendered spaces and how they create health concerns and make some of us feel unsafe in an environment where health and safety are the top priorities in a student’s ability to learn. As is often the case, our students are at the forefront of raising both concerns and our consciousness on matters of importance. I also thank everyone who responded to my proposal. I did listen to you and, regardless of whether your opinion matches my decision, your voice was heard.

I look now at my Community Proposal and recognize that it was a compromise solution that did very little to address the real problems of gendered spaces. I also realize that it was a compromise of my own personal beliefs and I have found the Proposal increasingly difficult to reconcile with what I believe to be right and just. Accordingly, my decision in this matter, after much discussion and deliberation, is to (1) remove gender identifications from any spaces on campus and (2) open single-occupancy restrooms for everyone’s use. This goes beyond my original Proposal, but it reflects where I believe Cooper Union needs to stand. We have always been ahead of our time and we must continue being leaders on issues of social justice.

We, who are in positions of power, have the obligation to not only stand with those without power, but to stand in front of them, clearing a path for them to walk. I cannot change the outside world and how it treats transgender and gender non-conforming people, but I can change the Cooper Union environment to help everyone feel safe when they are inside our buildings. Please know that my decision comes from a personal sense of obligation to others, which is a reflection of my beliefs and, I believe, an extension of the beliefs held by our founder.

From a practical standpoint, very little will actually change in our day-to-day use of restrooms. In fact, we have tested this premise in the Foundation Building for the past few months after some students removed the gender identifications from the restrooms. I chose not to put the names back on the restrooms in order to see how we all reacted. From what I have observed, most of us just continued using the facilities most familiar to us and visitors figured things fairly quickly. Going forward, we will identify the restrooms in the Foundation Building and 41 Cooper Square and the common-area restrooms in the Residence Hall as follows:

We are creatures of habit and most of us will continue using those restrooms that we normally have used, but they will no longer be owned by a specific gender. I also ask that none of us practice gender policing, where we attempt to restrict someone from using the same restroom we are using or make them feel uncomfortable for doing so. If you feel uncomfortable sharing a restroom, then the single-occupancy restrooms will now be available to you. As with all changes, this will take a little time to implement, so please be patient as we work through the signage and lock (single-occupancy restrooms) changes.

Beyond removing gender barriers to our restrooms, we need to improve the access to the restrooms for people with disabilities, especially in the Foundation Building. We will develop a plan for this purpose and begin implementing it this summer.

I believe that we, at Cooper Union, should embrace the future first and embrace it proudly.

A Proposal for our Community
We have spent part of this semester discussing issues facing transgender and gender non-conforming members of our community, and by extension, all of us. For some, this has been a conversation that has been going on for quite some time and, thus, a discussion that should be concluded and action taken. For others, this is a very new conversation with new language and new issues, much of which is not yet familiar, thus demanding more conversation and time to digest these ideas. In October we expanded all-gender restroom opportunities and last week we had an open campus meeting to be educated on transgender issues, both of which are good starts but, admittedly, not enough to satisfy those wanting more action and not enough for those not yet understanding the real problems facing transgender people. To resolve these apparently binary positions in a timely manner, I look to our shared community values of respect and humanity.

As a community, we respect the humanity of all individuals and seek to treat others as we would be treated. We speak of “issues” facing those in our Cooper Union family, but that broad term does not do justice to the very real and very practical problems experienced every day by some of our family. For those of us who have not had these lived experiences, we must use our empathy to see ourselves challenged every day just to use the restroom. For those with these lived experiences, I ask for your understanding of those who are new to the very real problems that you have faced for quite some time. For me, a binary decision is not in anyone’s best interest, so I offer the following proposal:

This is a proposal. I want your feedback. Please email me at mea@cooper.edu with your opinions. This is not a vote as I must be the one to make the final decision about what we will do, but I do want to hear from you and not impose any decision by fiat.