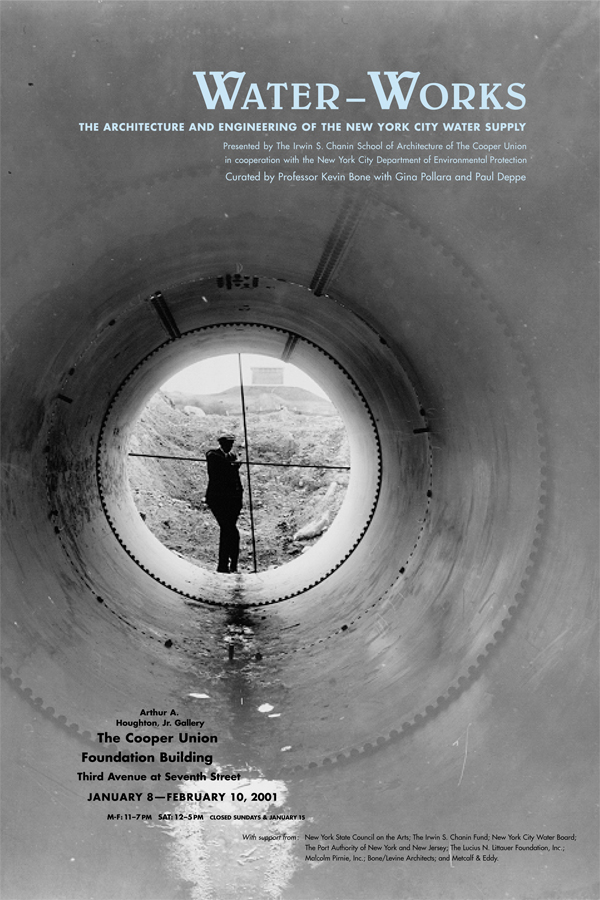 For 165 years New York City has been designing and building structures that collect, store and deliver water. The result of this monumental process is a system that reliably provides nine million people an abundant supply of the precious resource. The city water-works is widely regarded as one of the best urban water supplies in the world. It is a body of civil engineering that is without equal, representing a range of design and construction innovations whose formal clarity and structural logic is both technically inspired and artistically beautiful. The documentation of these structures articulates a vital portion of the history of public works in New York City.

In 1995, the Irwin S. Chanin School of Architecture initiated a program to work with the New York City Department of Environ-mental Protection (DEP) to assist this agency in establishing a permanent, functioning archive dedicated to the municipal water-works. The materials for this archive have been assembled from a vast body of historical documents that have been produced and passed down through the various agencies involved, describing the many projects that make up the water supply system. The DEP is the governmental agency that now oversees the New York City water supply. All aspects of the system: the protection, collection and the distribution of water; the design, maintenance, and construction of waterworks; the treatment and discharge of wastewater are among the many responsibilities of the DEP. The DEP is also the guardian of most of the archival materials describing the NYC water supply.

This exhibition on our vast municipal water supply system is an affirmation of the Cooper Union’s on-going commitment to architectural research and to the study of the urban environment, public works, and infrastructure issues relevant to New York City. It is also an affirmation of our social contract with the City of New York to assist in the preservation of vital architectural and engineering documents that record the inspired building culture of the metropolis. –Professor Kevin Bone