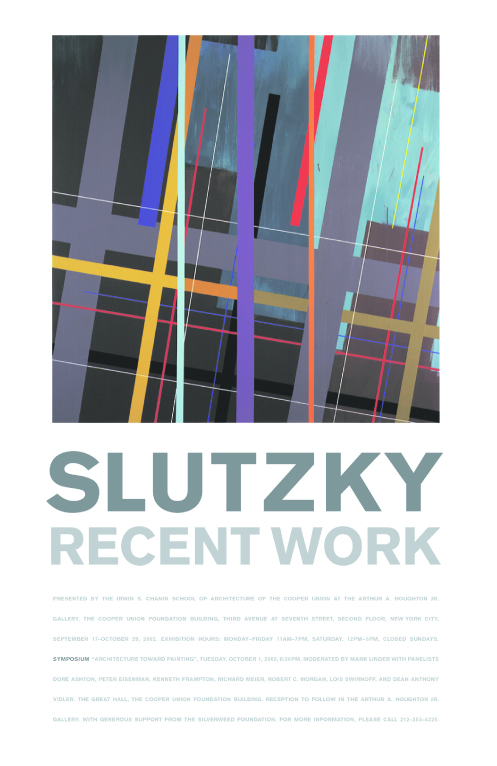 Slutzky’s paintings, in the senses outlined in the Transparency essays, have always been deeply architectural by implication, if not in fact, each painting being a fundamental reworking and advancement of these spatial concepts.—Anthony Vidler

As Dean Vidler of the School of Architecture has noted, Robert Slutzky’s artistic and architectural production is a reflection of the intersection between these two disciplines. This exhibition brought together twenty-eight of the painter’s recent works, illustrating Slutzky’s use of architectonic compositions and color to elaborate on the themes of ‘surface’ and ‘transparency’ that he has explored over the last fifty years. Slutzky co-wrote the seminal modernist architectural essay, Transparency: Literal and Phenomenal, with Colin Rowe in 1955, and these paintings suggest a continued play of architectural depth through the painted surface. Playing with the dimension-less properties of the grid, Slutzky manipulates the viewers perception of the work and moves painting beyond the modernist canon of flatness."The primary subject of my painting is color," Slutzky explains, "For this reason I call it color/structure painting. Turning its back on illusionism and allegory, this kind of art attempts to define its own universe of meanings, and in the polemical act of purifying itself from extraneously derived languages and imageries, aspires to ineffability."

The exhibition also included the cHUbE cHrOME project (1988), an exploration of the influence of color and geometry on the design of architecture form, which was produced in collaboration with Bruce Dunning and Pieter Versteegh.