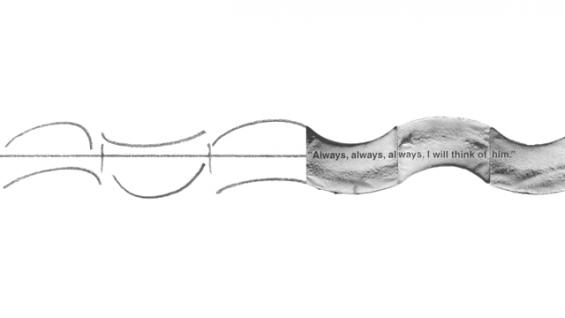 The Ballad of Kastriot Rexhepi retells the media narrative of an Albanian infant caught in the midst of the Balkan conflict. Abandoned by his panic-stricken parents during a fierce Serbian onslaught, Kastriot Rexhepi was found among the battle’s wreckage and given a Serbian name, Zoran, only to be abandoned again during the Serbian retreat. Left in a hospital, he was now assumed to be Albanian and renamed Lirim, before being finally reunited with his parents and having his name restored. Reading his story in the Los Angeles Times, Kelly was fascinated by Kastriot’s plight and the media’s fixation on his first words at the moment he was reunited with his parents. As she writes, "and Kastriot, young patriot, says ‘Bab.’" With his uttering of the Albanian word for father, The Ballad ruminates on the infant’s speech as an inscription of national, familial, and sexual identity.

With her retelling of the "miraculous" narrative of Rexhepi, Kelly mocks the media’s reliance on "redemptive" stories and continues her work’s exploration of the individual’s inscription in language. Kelly’s narrative is constructed in three stanzas and a shorter envoi, evoking the traditional form of a folk ballad. While viewing its 206 foot long expanse, Kelly’s work demands that the viewer physically participates in the reading of this work, suggesting that the use of language is not only mental, but physical as well. This exhibition installed the forty-nine panels of The Ballad around the walls of the Houghton gallery. As it passes through the glass partition to the double-height space of the library below, this installation forces the viewer to concentrate on the eye’s physical movements as it follows Kelly’s narrative, accentuating the viewer’s self-conscious movements through language.

Kelly constructed these panels by attaching stenciled letters to the filter of a clothes dryer. As thousands of pounds of black and white clothes were laundered, this process slowly printed text onto the lint that accumulated on the filter. The ‘wave of the dryers’ pattern suggests, among other things, the lilting tones of oral narrative. This exhaustive process both uses and produces the mundane objects of everyday life which have characterized Kelly’s art since Post-Partum Document (1973), her landmark psychological investigation of maternity that bridged Conceptual art and feminism. The Ballad employs everyday domestic waste as a meditation on the epochal waste of the Balkan conflict; a "cleansing" that, as Ernest Larsen has noted, was chillingly realized in the "ethnic cleansing" of the Serbian forces.