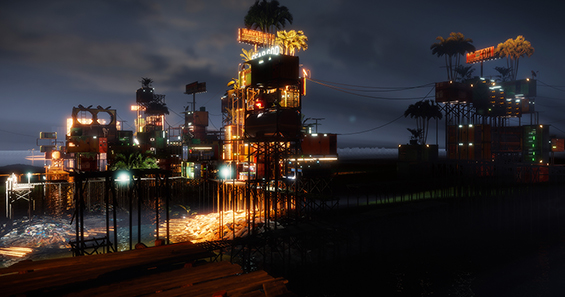 Reflections on artistic practice and production that focuses on the construction of comprehensive imaginary Utopias, Dystopias, and Heterotopias that deal with the interstices of architecture, emerging technologies, and culture. Often steeped in an eco and geo-political ideology, the artwork presented examines natural and constructed environments and their relationship to people, place and community; anchoring them with a direct relevance to contemporary social issues in ways that both communicate their participation in, and alienation from the larger world.

Olalekan Jeyifous received a BArch from Cornell University and is a visual artist whose work has been exhibited at venues such as the Studio Museum in Harlem, the MoMA, the Vitra Design Museum and the Guggenheim in Bilbao, Spain. He has received a number of awards and grants for his artwork such as a fellowship from the New York Foundation of the Arts, and grants from the New York State Council on the Arts as well as the Brooklyn Arts Council. He has completed Artist Residencies with the Lower Manhattan Cultural Council, the Visible Futures Lab at SVA, Headlands Center for the Arts, Bemis Center for Contemporary Arts, Socrates Sculpture Park, the Drawing Center’s Open Sessions program, and he was a Wilder Green Fellow at the MacDowell Colony.

In addition to his extensive exhibition history, he has spent over a decade creating large-scale artwork for a variety of public, private, and institutional spaces. He created award-winning installations for Starbucks located in the Barclays Arena in Brooklyn and their Flagship store located in Chicago’s Gold Coast neighborhood. Most recently, he has completed commissions for the Chicago Transit Authority, the Opa-Locka Community Development Corporation, a 50ft-tall sculpture for the 2017 Coachella Valley Music and Arts Festival, 4 large sculptures for the Public Square in Cleveland, OH, and a series of colorful, informative and vivid architectural mesh banners for a 5-storey parking garage located in downtown Durham, NC as part of their SmART Vision initiative.

This lecture will take place in room 315F and is open to current Cooper Union students, faculty and staff.