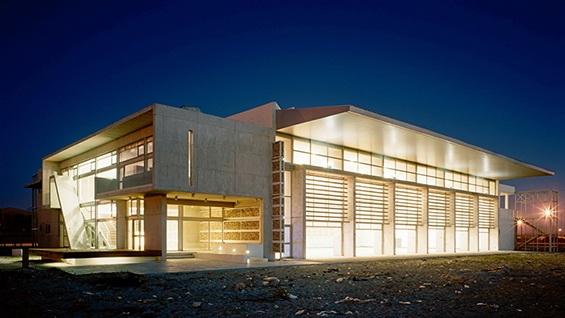 In 1995, one year after South Africa threw off the shackles of Apartheid and began the cathartic process of  cultural reinvention, Mokena Makeka joined the first year class of Architecture, in Cape Town, South Africa. "Experiments in Agonistic Praxis" is a syntactic journey spanning twenty years of practice, in various economic and social terrains, contested territories;  covering strategic leaps, tactical conundrums and spatial dialectics that move through and beyond the morphological and programmatic concerns of Architecture. For Mokena, Architecture is seen and conceived as “tactical spatial politics,” with the agility of guerilla warfare, and the ambitions of catalyzing progressive social change and inclusive modes of being, through the lens of design-  sometimes modest, sometimes imperious, always curious.

The lecture will be followed by a discussion moderated by respondent Lauren Kogod.

Mokena Makeka was raised in Maseru, Lesotho and New York. He is the founder of Makeka Designworks and an accomplished architect, curator, designer, global leader, scholar, speaker, and urbanist on African development. He has led and worked on various and complex construction projects in Lesotho, Madagascar, Tanzania, South Africa and China, including the Cape Town station project 2007-2016, Cape Town International Convention Center 2017, Apartments VA & Waterfront 2017, as well curated international exhibits, the most recent being the Africa@work exhibit at the Africa Center on Fifth Avenue, New York.

A respected expert on Transit oriented interchanges, Mokena was the lead architect and visionary for the reimagination of Cape Town station 2010, as well as Cape Town 2030. He has worked with the city of Cape Town and the provincial government of the western cape on various transit-oriented development projects as far back as 2002, and was the chief designer of the Mitchells Plain Transport Interchange. His work is committed to social transformation and cities of spatial and ecological justice. He is particularly concerned about the positive role that stations and rail can play in economic justice.

Amongst various architecture and urban design awards and recognition in design competitions, career highlights include being selected as one of the Ordos 100 architects by Hertzog & De Meuron and Ai Wei Wei. Mokena has served as a member of the World Economic Forum Global Agenda Council for Design. He has also served as an advisor to the South African Minister of Human settlements. He also served on the national committee for arts and culture for the 2010 FIFA World Cup.

This lecture and discussion is free and accessible to the public.