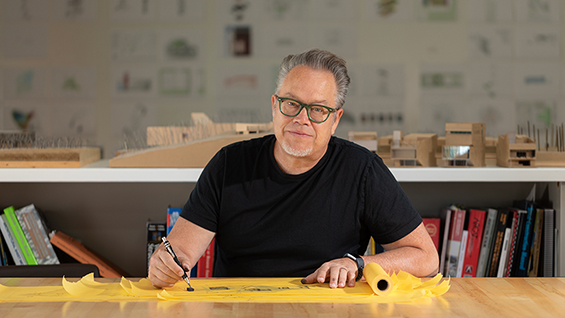 Blackwell, working outside the architectural mainstream, will discuss his architecture and design process as being based in design strategies that draw upon vernaculars, building typologies and the contradictions of place; strategies that seek to transgress conventional boundaries for architecture. Rather than a removal from reality, abstraction is the process of connecting to place, looking for possibilities of maximum meaning with minimal means. Blackwell will demonstrate how these ideas of reinterpreting the familiar and the typological are generated from careful observations of intersections between nature-made and culture-made figures and conditions particular to an architectural situation. Using design works from Marlon Blackwell Architects and exemplary student work from his design studios, Marlon will speak to a resilient architecture that can be achieved as an intelligent interplay between place, form and detail. In particular, he will illustrate the necessity of being responsive to environmental factors, the specificities of site, and material culture that ultimately provides an architecture that can be felt as much as it is understood, as immediate and tactile as it is legible, contributing to fundamental ennobling experiences of the everyday for citizens and communities.

Marlon Blackwell, FAIA, is a practicing architect in Fayetteville, Arkansas, and serves as the E. Fay Jones Distinguished Professor at the Fay Jones School of Architecture and Design at the University of Arkansas. He served as Department Head from 2009 – 2015 and was named among the “30 Most Admired Educators” by DesignIntelligence in 2015. Work produced in his professional office, Marlon Blackwell Architects, has received national and international recognition with significant publication in books, architectural journals and magazines and numerous design awards, including the 2016 Cooper Hewitt National Design Award in Architecture. Marlon was a 2019 Resident Fellow at the American Academy in Rome, inducted into the National Academy of Design in 2018, and selected as a United States Artists Ford Fellow in 2014. He received the E. Fay Jones Gold Medal from the Arkansas AIA in 2017 and the 2012 Architecture Prize from the American Academy of Arts and Letters. A monograph of his early work, “An Architecture of the Ozarks: The Works of Marlon Blackwell”, was published in 2005 by Princeton Architectural Press, who will also publish a new monograph titled “Radical Practice” to be released in Fall 2020.

This lecture will take place in the 3rd Floor Lobby and is open to current Cooper Union students, faculty, and staff.