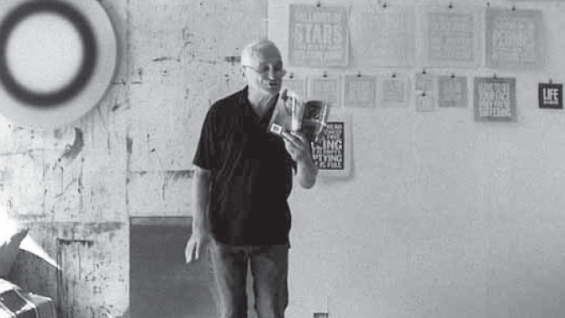 An innovator of poetry and performance, John Giorno's career spans fifty years of radical brilliance and is intertwined with collaborators such as Andy Warhol, William S. Burroughs, Jasper Johns, Glenn Branca, Robert Moog, and John Ashbery. Whether written, performed, recorded, filmed or exhibited, John Giorno's work--as a "true poetic radical"--is a blessing in the revolution of language, sexuality, politics, and spirituality in contemporary life. A leading figure in the formation of the Bowery's avant-garde in the early 1960s, he pioneered the open celebration of queer sexuality in artistic culture; led an anti-war movement with Abbie Hoffmann in the 1970s; and, with his AIDS Treatment Project, begun in 1984, set the bar for direct, compassionate action in the AIDS crisis.

After "starring" in Warhol's "anti-film" Sleep (1963), Giorno went on to establish the not-for-profit production company Giorno Poetry Systems to experiment with new uses of technology in poetry through electronic and multimedia, and to expand new forms of sound and concrete poetry, including poetry as installation and "happening" and poetry integrated into consumer products. In 1967, Giorno organized the first Dial-A-Poem event at the Architectural League of New York which made short poems by various contemporary poets available over the telephone. This piece was later exhibited to considerable acclaim at the Museum of Modern Art in 1970, and resulted in a series of LP records. To date, Giorno Poetry Systems has released over fifty albums of poets, numerous cassettes, videopaks, poetry videos, DVDs and films, books, silk-screen Poem Prints and Poem Paintings. Giorno is fabled for his high-energy live performances, originally honed in events at music, art, and public venues with William S. Burroughs in the 1970s and 80s. His use of found materials, montage techniques, and careful exploration of the nature of mind through meditation has produced a vast body of work containing explosive configurations of queer sexuality, spiritual practice, and fragments of everyday life. As a practicing Buddhist, studying under the great Tibetan Buddhist master Dudjom Rinpoche,

Giorno has also been an important force in the development of Buddhism in North America, and in the ongoing conversation between Buddhist and poetic practice. Giorno is the author of many books of poetry, which have been translated into several languages. Subduing Demons in America: The Selected Poems of John Giorno, 1962-2008, a career-spanning survey of his work, was published by Counterpoint/Soft Skull in 2008.

Open only to students, faculty and staff of The Cooper Union