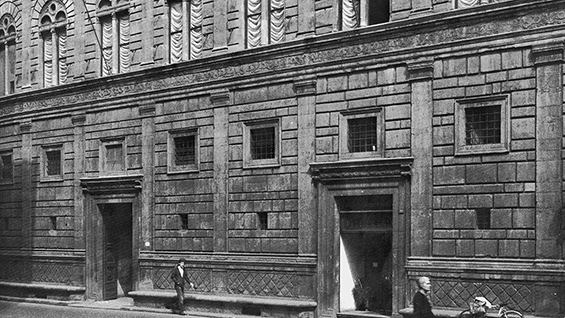 Peter Eisenman, the Fall 2019 Robert Gwathmey Chair in Architecture and Art at The Cooper Union, is an internationally recognized architect and educator whose award-winning large-scale housing and urban design projects, innovative facilities for educational institutions, and series of inventive private houses attest to a career of excellence in design.

Prior to establishing a full-time architectural practice in 1980, Mr. Eisenman worked as an independent architect, educator, and theorist. In 1967, he founded the Institute for Architecture and Urban Studies (IAUS), an international think tank for architecture in New York, and served as its director until 1982.

Currently a Visiting Professor at the Yale School of Architecture, Mr. Eisenman’s academic career also includes teaching at Cambridge, Princeton, Harvard, and Ohio State universities. Previously he was the Irwin S. Chanin Distinguished Professor of Architecture at The Cooper Union, in New York City. He is also an author, whose most recent books include: Lateness (Princeton University Press, 2020), Written Into the Void: Selected Writings, 1990-2004 (Yale University Press, 2007), and Ten Canonical Buildings, 1950-2000 (Rizzoli, 2008), which examines in depth buildings by ten different architects.

Pier Vittorio Aureli is an architect and educator whose focuses on the relationship between architectural form, political theory and urban history. He is the author of The Possibility of an Absolute Architecture (2011) and The Project of Autonomy: Politics and Architecture Within and Against Architecture (2008).

Greg Lynn is the founder and principal of Greg Lynn FORM office in Los Angeles, and a Professor at  the University of Applied Arts in Vienna, as well as a Professor at the UCLA School of the Arts and Architecture. He is CEO and co-Founder of the Boston based robotics company Piaggio Fast Forward.

Preston Scott Cohen is a Professor of Architecture at the Harvard Graduate School of Design (GSD) and the Design Principal of Preston Scott Cohen, Inc. based in Cambridge, MA. He is the author of Lightfall (Skira Rizzoli, 2016), The Return of Nature (2015) and Contested Symmetries (2001).

Elisa Iturbe is a Critic at the Yale University School of Architecture and an Adjunct Assistant Professor at The Cooper Union. She is the editor of Log 47, titled Overcoming Carbon Form, and co-author with Peter Eisenman of Lateness (2020).


The Robert Gwathmey Chair, a rotating professorship in art and architecture, was established by Charles Gwathmey in 1993, in honor of his father, Robert Gwathmey, a professor of art at The Cooper Union from 1942 to 1968. This position has previously been held by Bill T. Jones, Norman Bryson, Peter Eisenman, Victor Burgin, Maya Lin, Vito Acconci, Hans Haacke, Michael Webb, Thomas Hirschhorn, and Torkwase Dyson.