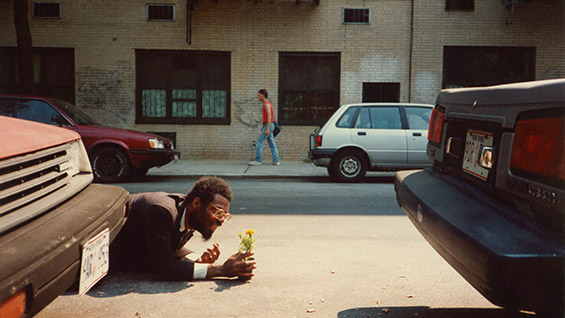 Pope.L has been called “the greatest performance artist of our time”. Utilizing preconceived notions embedded within contemporary culture, his provocative practice spans more than four decades and includes painting, sculpture, installation, video, and writing. Pope.L is perhaps best known for his arduous and absurdist performances and interventions in public spaces, in particular his crawls, in which the artist has dragged his body across the landscape sparking dialogue about American society and themes ranging from language to gender, race, social struggle, and community.

This public lecture coincides with a major moment for the artist, when three New York City arts organizations -- Public Art Fund, Whitney Museum of American Art, and The Museum of Modern Art, -- will co-present Instigation, Aspiration, Perspiration, which is the title of a singular concept that buttresses a trio of complementary exhibitions: Conquest, Choir, and member that explore Pope.L’s boundary pushing practice. On Saturday, September 21, Public Art Fund will launch the exhibition with Conquest, Pope.L’s largest performance to date in which some 140 people will crawl over five hours in relay on the sidewalks of Downtown Manhattan. For this free performance, participants will abandon their physical privilege, embrace their vulnerability, and express the power and contradiction of collective expression.

About the Artist
Pope.L (b. 1955, Newark, NJ) is a visual artist and educator. He studied at Pratt and later received his BA from Montclair State College in 1978. He also attended the Whitney Independent Study Program before earning his MFA from Rutgers University in 1981. Pope.L was Lecturer of Theater and Rhetoric at Bates College in Lewiston, Maine until 2007 when he joined the faculty in the Visual Arts Department at The University of Chicago, where he is currently Director of Undergraduate Studies for Visual Arts. Pope.L is represented by Mitchell-Innes & Nash, New York.

About the Talks
Public Art Fund Talks, organized in collaboration with The Cooper Union, connect compelling contemporary artists to a broad public by establishing a dialogue about artistic practices and public art. The Talks series feature internationally renowned artists who offer insights into artmaking and its personal, social, and cultural contexts. The core values of creative expression and democratic access to culture and learning shared by both Public Art Fund and The Cooper Union are embodied in this ongoing collaboration. In the spirit of accessibility to the broadest and most diverse public, the Talks are offered free of charge.

Public Art Fund Talks are presented in partnership with The Cooper Union.