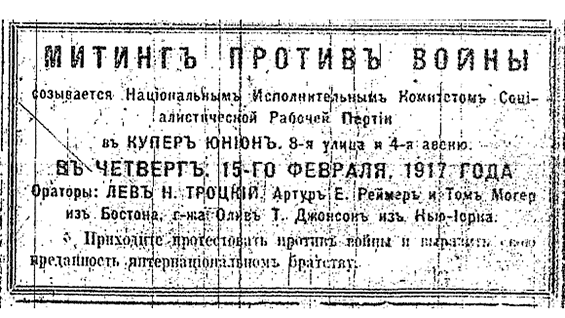 A 1917 Russian-language notice announcing a meeting 'Against the War' featuring Lev N. Trotsky, in the Great Hall

Lev Davidovich Trotsky burst onto the world stage in November 1917 as co-leader of a Marxist Revolution seizing power in Russia. It made him one of the most recognized personalities of the Twentieth Century, a global icon of radical change.

Yet just months earlier, this same Lev Trotsky was a nobody, a refugee expelled from Europe, writing obscure pamphlets and speeches, barely noticed outside a small circle of fellow travelers. Where had he come from to topple Russia and change the world? Where else? New York City.

Between January and March 1917, Trotsky found refuge in the United States. America had kept itself out of the European Great War, leaving New York the freest city on earth. During his time there—just over ten weeks—Trotsky immersed himself in the local scene.

He settled his family in the Bronx, edited a radical left wing tabloid in Greenwich Village, sampled the lifestyle, and plunged headlong into local politics. His clashes with leading New York socialists over the question of US entry into World War I, including headlining a meeting against the war in the Great Hall on February 15, 1917.

Kenneth D. Ackerman has made old New York a favorite subject in his writing, including his biography Boss Tweed: The Corrupt Pol Who Conceived the Soul of Modern New York. He now returns to New York in a different era, the exciting eve of American entry into World War I, for his first major new book in nine years.

Beyond his writing, Ackerman has served a long legal career in Washington, D.C. both inside as out of government, including as counsel to two U.S. Senate committees, regulatory posts in both the Reagan and Clinton administrations, and as administrator of the Department of Agriculture’s Risk Management Agency. He continues to practice private law in Washington.