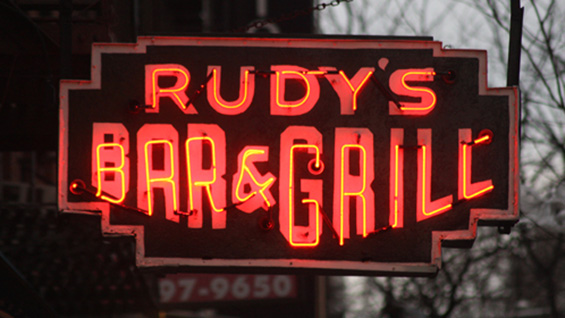 Thomas Rinaldi will deliver a free, public lecture about his book, New York Neon, which chronicles and documents New York's surviving early- and mid-twentieth-century neon signs, and examines their evolution and design, as well as their role in the streets of New York, in America’s cultural identity, and in our collective consciousness.

Thomas Rinaldi grew up in the Hudson River Valley near Poughkeepsie, New York. He is the co-author of the book Hudson Valley Ruins:  Forgotten Landmarks of an American Landscape, published by the University Press of New England in 2006, and the author of New York Neon, published by W.W. Norton in 2012.  His photographs have been published in the New York Times, the Wall Street Journal, the New York Post, the New York Observer, Westchester Magazine, CNN Online, and elsewhere, and have been exhibited at the Municipal Art Society of New York and will be shown in a forthcoming exhibition at the New York State Museum in Albany.  He holds degrees from Georgetown University and Columbia University, and has worked for the National Park Service, the New York State Office of Parks, Recreation & Historic Preservation, and the Central Park Conservancy.  Rinaldi currently works as an architectural designer in New York City.

The lecture is free, but registration is requested.

This lecture is part of the Herb Lubalin Lecture Series of Type@Cooper. The series is sponsored by the Herb Lubalin Study Center of Design and Typography at The Cooper Union, a public graphic design archive which places emphasis on a hands-on access to a wide range of design and typography ephemera.