The Griot, The Parrhesiac, The Cannibal, The Oversharer, The Artist, The Realist

In this free, public lecture, Devin Kenny A'09 will tease out links between various cultural personas over history, in an attempt to apprehend and elucidate art production in the age of "the Creative" by focusing largely on his own practice. In the past the "Artist" was one of the few people able to cultivate a mastery of materials, who would lend those skills towards communication, building connection amongst people (religiously, civically, and otherwise), and changing the ways one envisions the self. Now, in a vastly customizable, personalizable world of signification and certain kinds of visibility, how can the Artist navigate in a time when those tools and techniques are increasingly accessible and equally charged? 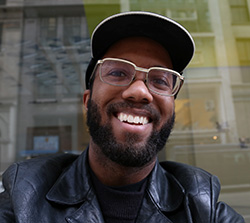 Devin Kenny is an artist, musician, and curator working across several mediums. Hailing from the south side of Chicago, he relocated to New York to begin his studies at Cooper Union. He has since continued his practice through the Bruce High Quality Foundation University, Skowhegan School of Painting and Sculpture, SOMA Mexico, the Whitney ISP and performances at various art and music venues in New York City, Chicago, Los Angeles, and internationally including: Het Roode Bioscoop, Biquini Wax, Artspace Auckland, REDCAT, MoMa PS1, Freak City, and Santos Party House. He received his MFA in 2013 from the New Genres department at UCLA and is an alum of the Whitney Independent Study Program.