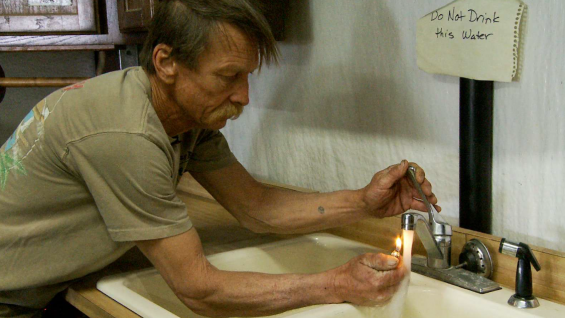 “The largest domestic natural gas drilling boon in history has swept across the United States.  The Halliburton-developed drilling technology of “fracking” or hydraulic fracturing has unlocked a “Saudia Arabia of natural gas” just beneath us.  But is fracking safe? When filmmaker Josh Fox is asked to lease his land for drilling, he embarks on a cross-country odyssey uncovering a trail of secrets, lies and contamination. A recently drilled nearby Pennsylvania town reports that residents are able to light their drinking water on fire. This is just one of the many absurd and astonishing revelations of a new country called Gasland. Part verite travelogue, part expose, part mystery, part bluegrass banjo meltdown, part showdown.”

Josh Fox is a filmmaker known for his use of gripping narrative, heightened imagery and commitment to socially conscious themes. In 2010, Fox wrote and directed the documentary feature film "Gasland," a personal documentary that examines how gas drilling affects our air and drinking water. "Gasland" has received international recognition, including a nomination for best documentary feature film by the Academy of Motion Pictures Arts and Sciences at its 83rd annual meeting and the 2010 Sundance Film Festival Special Jury Prize. Recently, Fox received the LennonOno Grant for Peace. In April 2010, Fox screened selected parts of "Gasland" during the ISD's Symposium "Hydro-fracking for Natural Gas." In conjunction with the exhibition, the filmmaker returned to Cooper Union for a full screening of the film, followed by a Question and Answer session.

In April 2010, Josh Fox screened selected parts of Gasland during the ISD's Symposium "Hydro-fracking for Natural Gas." In conjunction with the Exhibition, Josh Fox returned to Cooper Union for a full screening of the film, followed by Q&A.