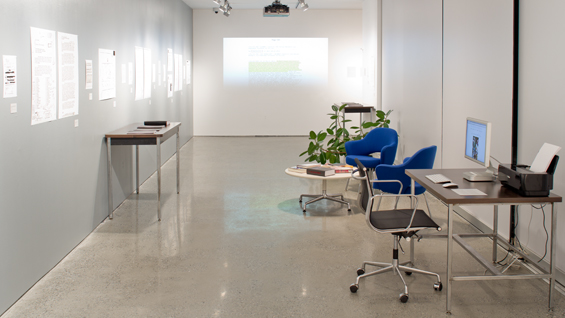 The Clandestine Reading Room (installation view) by Dolsy and Kant Smith A'07, 2014

The FOIA workshop, led by FOIA expert Nate Jones of the National Security Archive in Washington, DC, will introduce the Freedom of Information Act as a tool for research. The history of FOIA is studded with startling revelations, from the extent of the FBI's counterintelligence activities against activists and others, to the involvement of the CIA in foreign insurgencies and military coups. But FOIA has been used by historians, activists, and others to throw back the veil not only on abuses of power, but more generally, on important matters of historical fact that would have otherwise remained hidden from public knowledge. Artists and others interested in twentieth-century history, politics, activism, social movements, etc., will benefit from a greater appreciation of the methods and scope of FOIA. This workshop is a rare opportunity for many journalists and lawyers, much less the general public; however we are reserving a number of RSVPs for Cooper Union students. Students should reserve a seat through this website.