A Complicated Man: The life of Bill Clinton as Told by Those Who Know Him 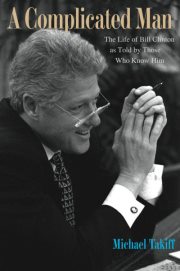 A Talk with Author Michael Takiff at The Cooper Union.
Free and open to the public
The Rose Auditorium
41 Cooper Square

Though President Bill Clinton has been out of office since 2001, public fascination with him continues unabated. At Cooper Union, heralded writer Michael Takiff will discuss his book A Complicated Man, a depiction of Clinton as told by more than 150 of the friends, colleagues and rivals who know him best.  Many books about Clinton have been published in recent years, but shockingly, no single-volume biography covers the full scope of Clinton’s life from the cradle to the present day, not even Clinton’s own account, My Life. In this, the first complete oral history of Clinton’s life, historian Michael Takiff presents what he believes to be a balanced book based on the through candid recollections of Takiff’s many subjects.

Michael Takiff is an independent scholar and oral historian whose writing has appeared in the New York Times, Washington Post, and Los Angeles Times. He is the author of Brave Men, Gentle Heroes: American Fathers and Sons in World War II and Vietnam.