Character Traits; or Can the Early Twentieth Century Please End? 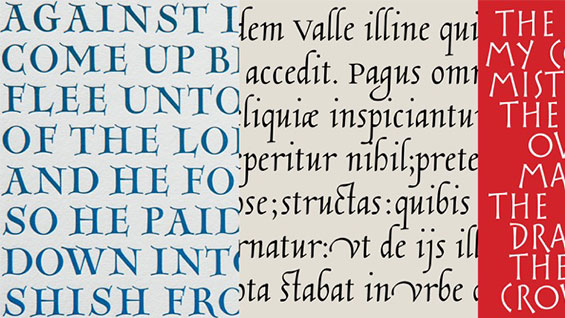 The literature of early twentieth-century typographic industries presented a highly edited view of lettering history in support of their own products. The result was an historical sleight of hand that presented the period’s technological and aesthetic presumptions as timeless fact. These late-Industrial aesthetics continue to exert a disproportionate influence on contemporary digital type design. In this talk, Russell Maret will attempt to tease out a different historical view of lettering, one that proposes that Industrial aesthetics should not be treated as the rule but the aberration in letter design. Along the way, he’ll touch on related topics such as Is legibility worth it? Are digital letterforms type? and other hot-button issues.

Russell will have a selection of his typographic books on hand for viewing after the talk, which is part of Type@Cooper's Herb Lubalin Lecture Series. Registration is required for this free, public program.

Russell Maret is a letter designer and letterpress printer working in New York City. He began printing in San Francisco as a teenager before apprenticing with Peter Koch in Berkeley and Firefly Press in Somerville, Massachusetts. He set up his own press at the Center for Book Arts, New York in 1993 and has been printing and publishing ever since. In 1996 Russell began teaching himself to design letterforms, leading to a twelve year study of letterforms before he completed his first typeface in 2008. In 2009 Russell was awarded the Rome Prize in Design from the American Academy in Rome. In 2011, he began working to convert some of his type designs into new metal typefaces for letterpress. Since then he has produced four metal typefaces and four suites of metal ornaments. He is a Master Lecturer in the MFA Book Arts & Printmaking Department of University of the Arts in Philadelphia and the current North American Chair of the Fine Press Book Association. He has been the printer in residence of the Press in Tuscany Alley, San Francisco (1990); Artist in Residence at the Center for Book Arts, NYC (1996); and a trustee of the American Printing History Association. Russell’s books and manuscripts are in public and private collections throughout the world.