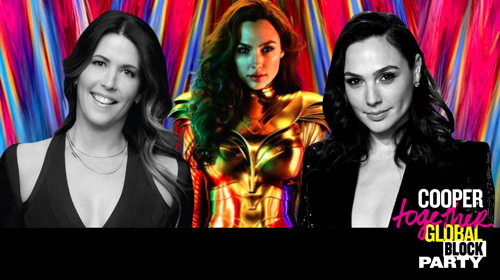 Join blockbuster director and 1993 School of Art alumna Patty Jenkins and actor Gal Gadot for a behind-the-scenes look at the Wonder Woman Trilogy. An audience Q&A will close the presentation.

Patty Jenkins is a writer/director best known for directing the Wonder Woman Trilogy. She began her career as a painter at The Cooper Union, and upon transitioning to filmmaking, spent eight years as an Assistant Camera Person/Focus Puller on commercials and music videos. She wrote and directed her first feature film Monster (2003) starring Charlize Theron after attending the AFI in Los Angeles. Most recently it was announced that Jenkins will be the first woman to direct a “Star Wars” feature film; Rogue Squadron is expected in theaters in 2023.

Gal Gadot is an Israeli actress, producer, and model, known for portraying Diana Prince / Wonder Woman in the DC Extended Universe and her role the in Fast & Furious franchise. Time magazine named her one of the 100 most influential people in the world in 2018.

Join alumni and members of the Cooper community in February as we gather virtually around the globe to commemorate Peter Cooper's philanthropic spirit.