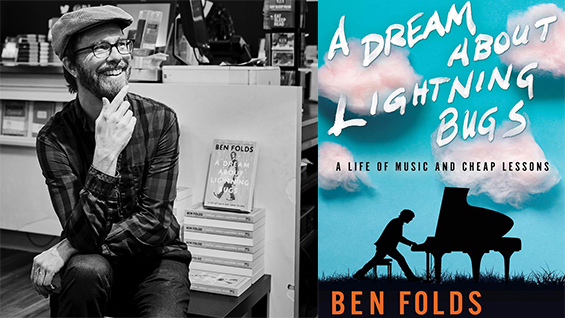 Ben Folds, singer-songwriter beloved for songs such as “Brick,” “You Don’t Know Me,” “Rockin’ the Suburbs,” and “The Luckiest,” former frontman of the alternative rock band Ben Folds Five, shares his brand-new story of growing up and into his voice. As part of this program, he will share the stories and songs of his life with fellow singer-songwriter Sara Bareilles.

Folds will be the first to tell you he’s an unconventional icon, more normcore than hardcore. Now, in his first book, A Dream About Lightning Bugs, Folds looks back at his life so far in a charming and wise chronicle of his artistic coming of age, infused with the wry observations of a natural storyteller. In his inimitable voice, both relatable and thought-provoking, Folds digs deep into the life experiences that shaped him, imparting hard-earned wisdom about both art and life. Collectively, these stories embody the message Folds has been singing about for years: Smile like you’ve got nothing to prove, because it hurts to grow up, and life flies by in seconds.

Ben Folds is widely regarded as one of the major music influencers of our generation. He’s created an enormous body of genre-bending music that includes pop albums with Ben Folds Five, multiple solo albums, and numerous collaborative records. His last album was a blend of pop songs and his Concerto for Piano and Orchestra that soared to #1 on both the Billboard classical and classical crossover charts.  For over a decade he’s performed with some of the world’s greatest symphony orchestras, and was named as the first ever Artistic Advisor to the National Symphony Orchestra at the Kennedy Center. He is also no stranger to television, having been featured for five seasons as a judge on NBC's critically-acclaimed a capella show "The Sing Off," and continues to appear in cameo roles on cable and network TV shows. An outspoken champion for arts education and music therapy funding in our nation's public schools, in 2016 Ben held the distinction as the only artist to appear at both national political conventions advocating for arts education, and has served for over five years as an active member of the distinguished Artist Committee of Americans For The Arts.

Sara Bareilles first achieved mainstream critical praise in 2007 with her widely successful hit "Love Song,” which reached No. 1 in 22 countries around the world from her debut album “Little Voice.” Since then, Sara has gone on to receive seven Grammy® nominations, two Tony nominations and an Emmy nomination. Her book, “Sounds Like Me: My Life (So Far) in Song,” was released in the fall of 2015 by Simon & Schuster and is a New York Times best seller. Making her Broadway debut, Sara composed the music and lyrics for “Waitress,” and made Broadway acting debut in 2017 by stepping into the shows lead role. Recently, Sara teamed up with Apple as an executive producer for “Little Voice” a 10-episode series, which she will create the original music for. On April 5, 2019 Sara released her fifth full-length and first album of original material since 2013, entitled “Amidst The Chaos,” to rave reviews. For this latest body of work, she joined forces in the studio with legendary Academy® Award-winning producer T Bone Burnett. As a result, the album spotlights her voice as a singer and storyteller like never before, while making an enduring statement. She will be touring this fall.