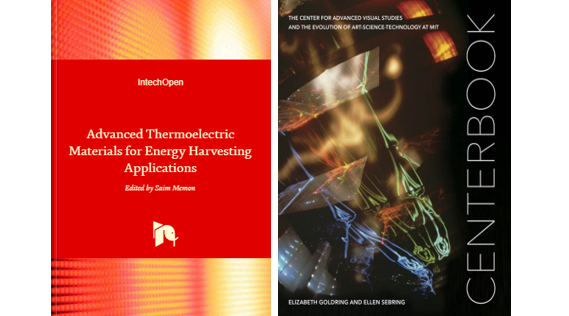 Left: "Advanced Thermoelectric Materials for Energy Harvesting Applications,” edited by Saim Memon. Right: “Centerbook: The Center for Advanced Visual Studies and the Evolution of Art-Science-Technology at MIT” by Elizabeth Goldring and Ellen Sebring.

Professor Robert Dell, Director of Special Project on Select Patent Monetization & Director of the Laboratory for Energy Reclamation and Innovation, Instructor Michael Petralia, Cooper Mechanical Engineering graduate Ashish Pokharel (ME’17 ME’19), and University of Iceland Engineering Professor Runar Unnthorsson co-authored a chapter in a research-intensive textbook, “Advanced Thermoelectric Materials for Energy Harvesting Applications,” edited by Saim Memon. Their chapter is on “Thermoelectric Generator Using Passive Cooling,” that presents an analysis of a point-of-use thermoelectric generator that is the subject of 6-patents by Prof. Dell, with Prof. Sidebotham and former Prof. Wei, that are owned by the the Cooper Union. The chapter can be read and downloaded for free here.

Professor Dell also released an essay and photograph in the Massachusetts Institute of Technology (MIT) Press book, “Centerbook: The Center for Advanced Visual Studies and the Evolution of Art-Science-Technology at MIT” by Elizabeth Goldring and Ellen Sebring. The essay was extracted from an interview about his time as a Research Fellow for MIT’s Center for Advanced Visual Studies (CAVS). The essay is written as below:

“Our culture has made a concerted effort to remove us from nature… We have an artificial sun, artificial stone, artificial weather in my office. We leave this self-contained environment, get into a car, and go to another self-contained environment. I have been a public official on land use boards for many years. I am continually disturbed [that] people would try to destroy our own life-support system –the earth. I tried to make something that was completely transportable. You can remove them from a sensitive environment without causing any damage or changes. I created what I call a “visual ballad” that gently sings the song of the earth. Many environmental artists cause great destruction to the landscape. When it is done in the name of art it seems to be justifiable, but to me it is vandalism… My first project at CAVS was to develop a geothermal simulator… The geothermal hot water circulated through the works like blood so that the copper areas were warm. There were areas of rock crystals, which are regarded by many cultures as embodiments of the earth’s energy… I developed a system with the aid of infrared thermometers that was extremely responsive to the micro-climate, and these new sculptures became part of the Center’s twenty-fifth anniversary exhibition.”

In addition, the MIT CAVS Special Collections has established the “Robert Dell Collection” –a series of materials and work created by Prof. Dell within their permanent archive. It is available in print at MIT School of Architecture + Planning. It will soon be shared online here.

Prof. Dell has also been invited to speak at the MIT Program in Art, Culture, and Technology (ACT) Artistic Research Luncheon Series at noon on Tuesday, March 10. That same evening, Prof. Dell will also be speaking at the premiere of the Artist & Archives series co-hosted by the ACT Archive and MIT’s Department of Distinctive Collections. Both events will be held in the Weisner Building (20 Ames St. Cambridge, MA 02319).