A jury that included renowned inventors, designers, and a patent attorney came to Cooper on Friday, July 11 to judge the second annual Invention Factory, a 6-week summer program that teaches students about the rigors, pitfalls, and excitement of inventing a new product. 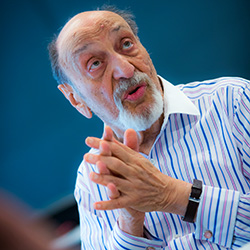 Listening to proposals for magnetic wall frames, a bottom-release garbage can and a bike helmet that could convert to a lock, among other inventions, were Stanley Lapidus EE'70, Ben Itri EE'75, Milton Glaser A'51, Fred Shen, Barry Negrin, Esq. ME'89, Yash Risbud EE'92/MEE-'94, Flavio de Roma Leao and Ulas Neftci.

The judges awarded first prize to the team of Abiyaz Chowdhury EE’16 and Eric Nguyen EE’16, who invented a device to easily convert a toilet from a single- to a dual-flush system. Second place went to Deanna Kovalcin ME’16 and Jessica Marshall EE’17 for a universal tape dispenser and cutter. The teams were awarded $5,000 and $3,000 respectively to continue developing their inventions.

This year the founders of Invention Factory, professors Alan Wolf and Eric Lima, worked with 17 students to imagine a problem, design a solution, build a prototype of an invention and file a provisional patent application. The teams received $2000 each for materials for their inventions and presentations.

In the first week, most students found a partner and practiced what inventors call ideation exercises, activities meant to prompt creative thinking. For instance, the professors asked students to imagine they owned a fat and a lean cat who had different diets. How could they be kept from eating each other’s food?

Once the teams came up with an idea for an invention, they needed approval from a majority of their classmates and at least one professor to move forward. If they received a lukewarm reception, teams would “pivot,” that is, refine or change their invention.

Every week, students presented their ideas to an outside jury, and afterwards their professors critiqued their presentation skills. Prof. Wolf said, “Learning how to explain and defend your idea is a big part of what we want students to take away from the program.” 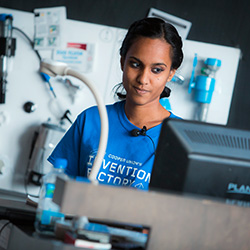 Prof. Wolf believes that by wrestling with a design problem, which probably can’t be solved completely on a first attempt, students learn persistence, a quality that may not be fostered in other academic coursework. Ultimately they have a better solution, and improved self-esteem.

The daily schedule of Invention Factory was demanding: officially students worked from 11 AM to 5 pm every week day, eating lunch at their desks thanks to food provided by Cooper. (In a thank you card to Wolf and Lima, one student thanked them for an “unlimited supply of Nutella.”) Most students stayed well past the prescribed hours, some working into the early hours of the morning. Students are not allowed to take other classes during Invention Factory. Prof. Lima said, “It’s an incredible luxury to completely immerse yourself for six weeks.”

Chowdhury and Nguyen created a device that makes updating a single-flush toilet to a dual-flush remarkably simple. It can be installed in less than a minute and requires no tools. The user drops a half-gallon container into a toilet tank. The container, which has a trap door, is controlled by a switch connected to the toilet lever. For a half flush, the trap door remains a closed; a full flush causes the trap door to release its half gallon of water. The team made a video of the installation and had an acrylic toilet tank built for a live demonstration.

Snip-It, the invention of second place winners Kovalcin and Marshall offers an ingenious and inexpensive way to cut a piece of tape no matter its type or width. In their well-organized and polished presentation, the team showed how their tiny device can be attached to a roll of tape with an elastic band and a set of hooks. The tape is then threaded between the plastic 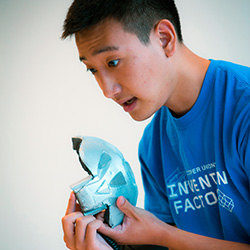 -encased blade and a hook-shaped piece that presses the tape against the blade, making a clean cut without the use of scissors. The pair created two prototypes, one for .8 inch-tape rolls and one for wider rolls of up to 2 inches. Unlike other tape dispensers, it has no exposed cutting edges. “We plan to buy a MakerBot and a 3D printer to continue our work with Snip-It,” said Marshall. “In the long term we hope to file a non-provisional patent application and eventually secure our own patent.”

Kovalcin credited the program with teaching students not only how to approach invention but also to formulate and present their ideas clearly. “Invention Factory gave us so much more than materials and ‘caffeination,’ “ she said. “It’s given us the skills we need to put our ideas in motion.”

Invention Factory has been made possible by generous funding from the Edward Durbin and Joan Morris Innovation Fund. Ed graduated from Cooper in 1948 with a degree in electrical engineering. We are deeply grateful for his support and encouragement of our students.