Andy Wilhelm is a sculptor who has taught Casting Techniques since 2005.

He received his MFA from Virginia Commonwealth University, and his BFA from Kutztown University in Pennsylvania. He attended Skowhegan School for Painting and Sculpture in 1998. He has exhibited his work in group shows around the country and has been the subject of a solo exhibition at Broadway Gallery in New York. He has also attended numerous residencies around the country.

"Andy Wilhelm's sculptures are made out of wood, bronze, gypsum cement, Styrofoam and glue. The objects are made up of a diverse collection of forms: some fundamental, like spheres, and others vaguely figurative, and yet others resembling tools. All have been rendered in a manner that reveals a time consuming practice. The process of making communicates a need to create a structure to explore the limits of material, and it’s ability to anchor ideas to the present time and place. Within this formal structure there is allusion to objects and potential phenomenon that exist on a much different scale than the one the viewer and the object currently occupies." 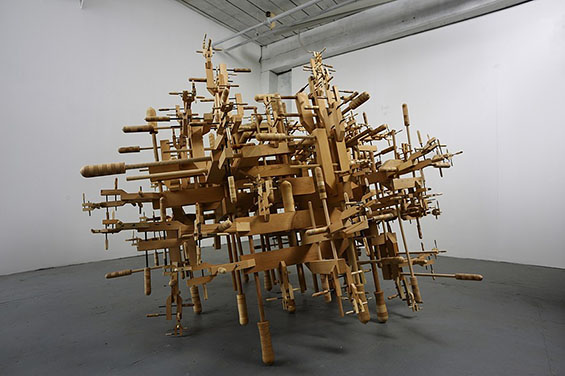