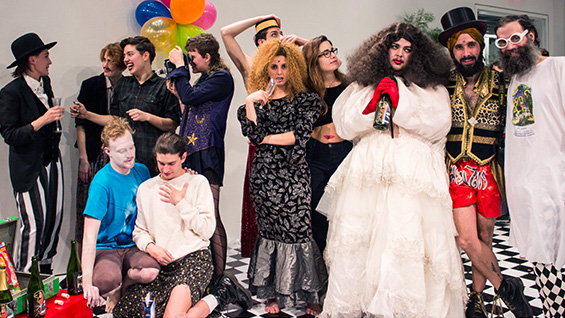 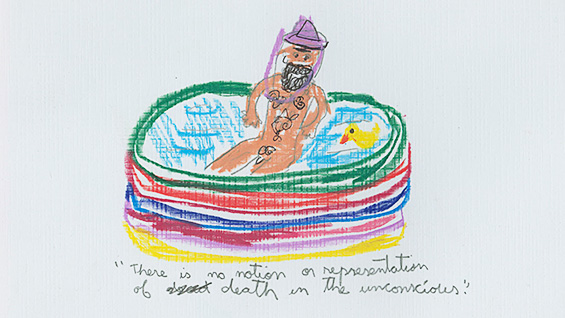 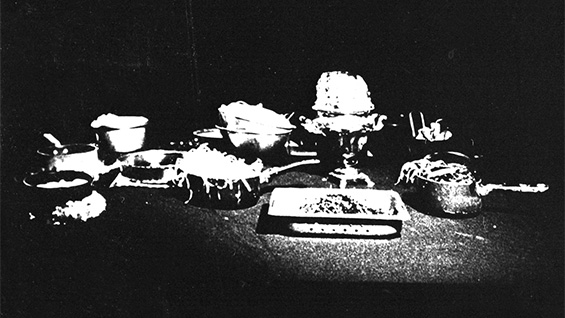 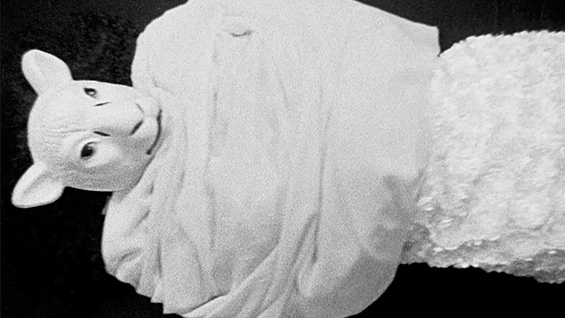 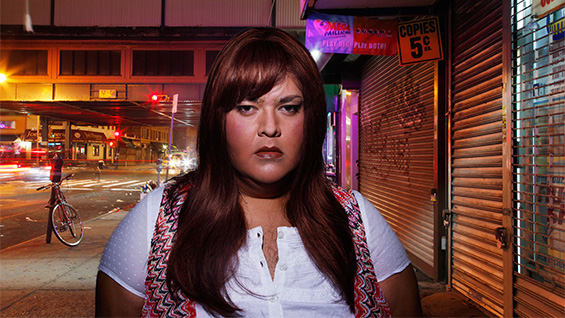 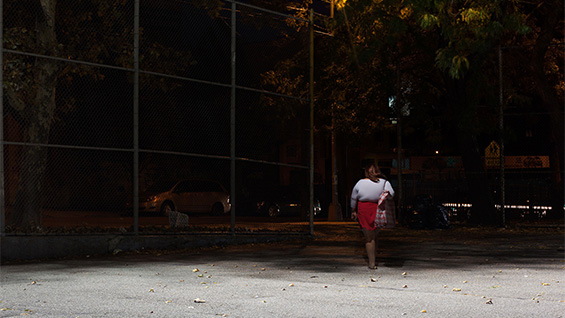 This group of seniors, the first of a series of "snapshots" featuring members of the class of 2014, makes it plain that there are many ways to arrive at the School of Art. They come from different geographies, including Venezuela, California, Virginia and Ethiopia. Each followed a similar path of first exploring one life direction and then choosing to follow a passion for art at The Cooper Union. We talked to them about their journeys, their senior exhibitions, their experiences at Cooper and what's next. 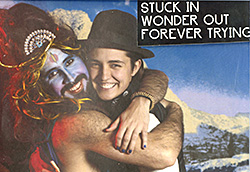 Jose Figueroa and Jessica Robbins' collaborative senior exhibition, "Stuck In Wonder Out Forever Trying," took everyone by surprise, including the artists. Jose, 27 years old, grew up in Caracas, Venezuela, in a house of doctors. After high school he studied engineering in his home city. "Engineering school was very easy for me because I am very much into numbers. And that's why it was a hard decision to get out because I knew I could pass and leave with a degree and make a decent living. But I wasn't happy," he says. While taking art classes as "a hobby" he received an artist's residency in Skowhegan, Maine where School of Art alumni encouraged him to apply to The Cooper Union. He dropped out of engineering school to attend. "I told my parents when they were on vacation," he says.

Following a similar path, but in another world, Jessica, 26, grew up in Williamsburg, Virginia and attended Virginia Military Institute for two years on a soccer scholarship. "When I got to VMI I realized that it was the opposite of how I wanted my life to be: structured, regimental, obsessed with tradition," she says. "I always wanted to move to New York and try the art school thing. Someone at VMI told me about Cooper. So I dropped out, moved here and was out of school for a year trying to figure out what a portfolio was. I applied to Cooper. Didn’t get in. Went to Parsons for a year and then finally got into Cooper."

Jose and Jessica, though friends, did not initially imagine collaborating on anything, much less their senior exhibition. "In freshman year we were aesthetically at opposite ends of the world," Jose says. They both laughed at a mutual friend's suggestion that they share the large space of the 41 Cooper Gallery for their culminating student show. But then, "we started thinking about our backgrounds and genders and position in life. And it seemed great to come together and just clash," Jose says. Pushing each other, they went (literally) hog wild, creating an art experience that they say had a line out the door on opening night.

They divided the gallery space into separate "rooms." A visitor had to traverse each one in turn in order to reach a reception area filled with costumed characters, balloons, custom-labeled champagne bottles and a whole, pit-roasted pig that had traveled all the way from Virginia in a cooler on top of a car. In each room a visitor encountered innumerable objects both found, for example holy water from Israel, and made, such as light bulbs covered in latex. Amidst the objects were various performers: someone on a swing; a bearded, naked man splashing in a kiddie pool filled with milk ("a beautiful surprise," Jose says); a Butoh performance against a projection of fireworks; a belly dancer serving champagne. "It is important to mention that we opened on April Fool's Day. So we were thinking about the role of the artist as a trickster and a shaman. That was something we were playing with: what is fake and what is real," Jose says.

For the immediate future Jessica plans on continuing to make art while working in an artisan's leather shop in the West Village. She speaks with unfiltered affection for her time at The Cooper Union. "I am so indebted and grateful to Cooper that words could never explain," she says. "I am better at everything. Cooper has taught me how to think and not what to think. And those are very distinct things. Cooper has allowed me to trust myself and believe in myself in ways I never would have. And also being believed in and being pushed to follow whatever is interesting to me. It's beyond words how much I have changed at Cooper."

After graduating Jose says he will attend the University of California at Berkeley for an Art Practice graduate program. "Cooper has been magical," he says. "For sure I am a better artist. I am so prepared. You know that you have some agency. You have some power in your vocabulary in the way you read things. This is such a beautiful community. I think the power of this school relies on the student body. It is such an amazing, magical group of people that comes together. I got the opportunity to meet this girl who has such a different background from mine and still relate on so many levels." 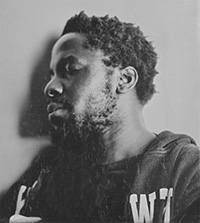 Effi Ibok's senior exhibition, "The Story of Nothing," focused, he says, "on the process of creation. How everything comes to be how it is: from really simple to complex." It featured prints he made using an aluminum foil-based "kitchen lithography" technique he discovered on YouTube. "I thought of them as depicting the stages of existence going from chaos to order. It starts with big prints of chaos and ends with a print of galaxies." He hung them inside an enclosed, darkened space and used a lighting system to display them one at a time. "The light projection tells the story because you can only see that particular work when it is lit. It moves from piece to piece. And then I had a 16 millimeter film projection in the back. That one was more about the 'creator' or the entity that creates. It starts out with hands making a pot, evolves into depicting a kitchen and ends with a procession of eccentric faux deities."

He admits that his background plays a part in his current interests. "It's kind of a confusing subject of where I am from," Effi says. "I am originally Nigerian but I grew up in Ethiopia. But I also went to an international school and watched a lot of American TV. It's always put me in this position of analyzing. Where am I from? What makes us who we are? I like digging deep into what's going on and asking a lot of questions. And the more questions I ask the more it leads to the beginning of things." While growing up he visited New York, where his aunt lives, over several summers. Then he moved to the United States eight years ago to attend Syracuse University as a TV, radio and film major. He wasn't fond of it and took a year off. "I always wanted to study art but I didn't think that I could," he says. His aunt told him about The Cooper Union.

"It was awesome," he says of his time at the School of Art. "It changed me a lot. Taught me a lot. It allowed me to think really independently and create my own ideas and test those with people or against people and just make a lot of work. That's what I am really into right now. Just make more and more work. And the venue is just perfect if you want to make work because there is a ton of stuff to work with." After graduation he will start a year-long studio program at the Whitney Museum, during which he hopes to sell work to support himself. After that? "I want to stay in the States long term. It's hard to figure out where I am supposed to go. I am here now and it's like I have momentum. So I would like to keep staying here." 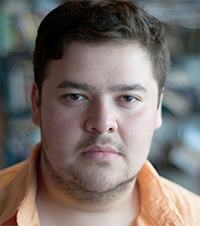 Fortunato Castro, 27, started on a different journey before arriving at the School of Art. Born in Hanford, a farming town outside of Fresno, California, Fortunato spent his early childhood on the Lemoore Naval Air Station located there. Then he did a lot of moving: nine different schools from California to Connecticut followed by stints as an adult in New York City and Virginia. He taught painting at Wesleyan's summer program for a while and worked at Whole Foods. He finally decided to apply to George Washington University to pursue a degree in American foreign relations policy, with the intention of going into intelligence work. He also applied to The Cooper Union, "on a lark." He got the acceptance letter right as he was about to register for classes at GWU. "I knew I would always regret it if I didn't come to Cooper," he says.

Fortunato's senior show, "Some Girl, Some Where," appeared in December 2013 and got enough buzz that New York's The Cut interviewed him about it. In a series of ten highly staged color photos Fortunato appears as the same female character in various locations and various states of intimacy. One resembles a headshot for a work ID, with a wan smile. Another resembles something taken on a cell phone for a lover's pleasure. The images are carefully composed -- with months of preparatory planning -- yet often use the visual vocabulary we associate with "artless" snapshots.

"I started wanting to create a character that stood as a cipher for my mother at my age at this point in my life in an attempt to understand her through a different lens," Fortunato says. "If my mom were 26 in New York City right now, what would she be doing? What kind of images would exist of her? And who would be privileged to see those images?" From there the project evolved, he says. "I was interested in the way we distribute photos of ourselves through society. You have your yearbook photo that everyone sees, and then you have a photo you take with your friends before you go out -- sort of semi-private but for the public eye -- and then you have those photos you only send to one or two people, something very intimate. So it's all these images together that create an illusion of identity. "

Fortunato, who completed his classes in the fall semester, now works as a photography studio technician at Pratt Institute. "Although I still work photographically, it's important for me to continue to expand my practice into different directions," he says. "When I came to Cooper, I was still unexposed to the contemporary art world that Cooper pushes you into in this really great way. All of my classes were about a critical way of looking at things. It's about looking underneath and closely examining what it is you are doing.That the greatest lesson I take from my time at Cooper, a constant questioning.”