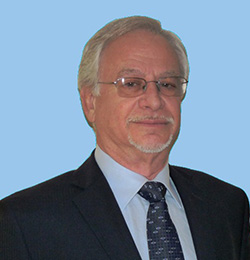 Stephen Gerard graduated from The Cooper Union with a mechanical engineering degree in 1967. After two years as a design engineer at Du Pont (earning a Marketing MBA from Rutgers) and two years as an Internal Auditor with Citibank (earning an accounting & finance MBA from NYU), he passed the NYS CPA exam and spent over 30 years with C&L (subsequently merged into PWC). There he became a globally-recognized expert in fair market valuation of intangible assets & businesses for tax & financial reporting purposes (in connection with accounting for M&A), retiring as a Partner in 2004. Post-retirement, he was a part-time ‘Senior Technical Advisor-Valuation’ for the FASB (the organization that promulgates ‘Generally Accepted Accounting Principles’ in the US) and was a part-time Consultant to PWC.

Today, he is President of CaesarEx, a company founded by his older brother Henry in early 2013. They are developing a compressed-air-driven turbine generator, a device (invented by his brother) for which they received a US patent in 2013 and EPO approval for European patent registration in 2016. If they succeed, they will radically increase global use of renewable energy sources by enabling grid-scale Compressed Air Energy Storage & Recovery (“CAES”).

Stephen helped found: (1) the Greenwich Village Little League in 1984, (and served as Treas. for almost 15 years thereafter); (2) the Greenwich Village Soccer Club in 1988 (and served as Pres. for two years thereafter); and, (3) the Manhattan RBI League for 16 to 18-year-olds in 1997. In 1987, as President of the Ad Hoc Tenants’ Committee, he successfully negotiated the conversion of his building to a ‘Condop’ and served on and off as its Treasurer for over 18 years. He is still serves on its Board.