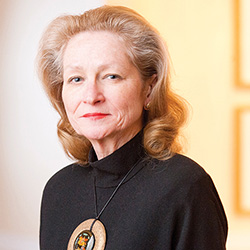 Judy Freyer recently retired from The Board of Pensions of the Presbyterian Church (U.S.A.) where she worked for over three decades. Judy joined the Board in November 1988 as Assistant Treasurer and, in 1990, was promoted, becoming the first woman in the role of Treasurer. She was named Vice President of Investments and Treasurer in 1990 and Chief Investment Officer in 1999. She was promoted to Executive Vice President in 2016.

Beginning in 1990, Judy served as the Board of Pensions staff representative to the Presbyterian Church Committee on Mission Responsibility Through Investment (MRTI), which implements the policies of the General Assembly of the PC(USA) on socially responsible investing. She has participated in corporate engagement matters involving supplier standards, bank lending practices, equal employment opportunity in the workplace, water use in the manufacture of computer chips, Israel-Palestine issues, human trafficking, climate change, environmental racism, and environmental degradation.

Prior to joining the Board of Pensions, Judy worked for 12 years at UGI Corporation, a public utility and energy company in Valley Forge, PA.  As a member of the treasury department, she was responsible for financial planning , pension plan investment portfolio management, and investor relations. From 1973 to 1976, she worked for the U.S. Department of Defense in Nuremberg, Germany. She received her undergraduate degree from Manhattanville College, M.A. in Economic History from the University of Pennsylvania, and M.B.A. from Boston University. She was a Woodrow Wilson Fellow in history and economics and is a CFA charter holder.

Judy serves on a number of other governing boards, including the Children’s Scholarship Fund of Philadelphia, the Curtis Institute of Music, the Lantern Theater, the Library Company of Philadelphia, Ministers and Missionaries Benefit Board (MMBB) of the American Baptist Churches USA, the William Penn Foundation Investment Committee.