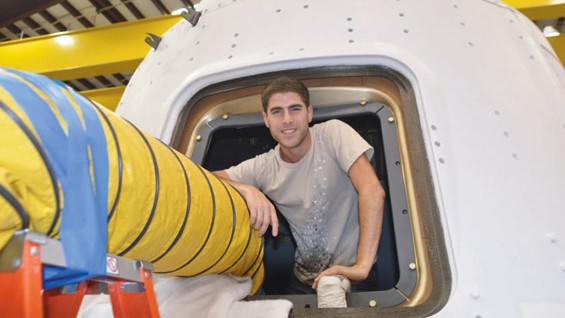 George Ketigian had just begun working on a graduate degree in engineering at Cooper Union, when he received a job offer from SpaceX, a private company that builds launch vehicles and spacecraft. He jumped at the opportunity. “Even at a young age, I was very interested in ‘how things worked’ and knew that I wanted to be involved in hands on projects. I didn’t want to work on things that were physically impossible to produce,” he explains. “Building things has always been my passion.”

As a kid, growing up in Garden City, Long Island, Ketigian loved to tinker in his father’s bike shop. “It was a family business started by my great-grandfather. My dad definitely influenced me with his hands-on mechanical skills. He always encouraged me in my own mechanical tinkering.” All the tinkering, though, laid the groundwork for an interest in engineering.His mother, a nurse, is very practical, systematic and intelligent, which also influenced him—he is at heart a problem-solver.

It isn’t a giant leap from the bike shop to the engineering lab. Ketigian is still making things, experimenting in the shop, but now the stakes are higher. SpaceX’s big project is the Falcon 9 launch vehicle, along with the Dragon spacecraft, which will transport supplies to the International Space Station (ISS), and at some point will also transport people. Falcon 9 was first launched in June 2010, and again in December 2010.

In the aerospace industry, cutting-edge technology and manufacturing processes are pushed to their limits. “Everything intended for flight has to be as lightweight, compact and as durable as possible to withstand the incredibly harsh environment of space,” Ketigian explains. “Lightweight and compact, because it takes a lot of energy to carry mass to orbit, and durable because items in orbit are bombarded by radiation, operate in a vacuum, and face thermal cycling. When in the sun, components can heat up to hundreds of degrees, and when in the shadow of the sun, they’ll cool down to sub-zero temperatures. Building hardware that’s able to withstand these conditions, while being lightweight and super-efficient, is a very cool challenge.” 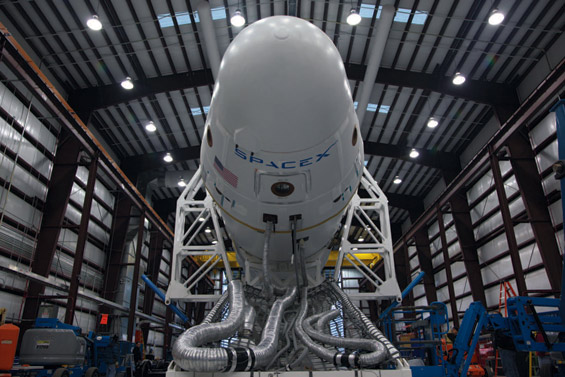 Ready for Liftoff: the Dragon capsule integrated with the Falcon 9 rocket prior to launch at SpaceX's Cape Canaveral launch facility.

SpaceX works closely with NASA, which has always hired commercial companies to build spacecraft. However, SpaceX is operating on a fixed-price contract, as opposed to the cost-plus contracts NASA has signed in the past. Cost-plus contracts have commonly led to large cost overruns, while fixed-price contracts require completion of milestones for payment, something that ultimately saves taxpayers’ money. “The Space Shuttle has only a few missions remaining before the fleet is retired, leaving the US without the capability to carry astronauts to space.”

Ketigian explains.“With NASA’s support, SpaceX will be ready for their first manned test flight in three years. And with our plans for 12 missions to carry cargo to and from the International Space Station for NASA, SpaceX systems will be flight-proven before other companies can even develop their systems.”

Ketigian works as an avionics engineer for SpaceX (the word “avionics” is an amalgamation of “aviation” and “electronics”). In other words, his department is responsible for things like the power and guidance systems of rockets, as well as software, wiring and instrumentation. Specifically, Ketigian is responsible for wire harnessing and integration of the vehicle. Harnessing refers to the wires and cables that connect components throughout the vehicle. Each component must be fully tested and functionally sound; and then, he makes sure that all the individual components in different locations of the rocket are interconnected properly.

“Integration,” Ketigian explains, “is the step where all components come together with the complete rocket. It’s the coolest part of my job and the most intense.” This means that he has to be there for the final integration of the vehicle and for vehicle operations. “We perform vigorous vehicle operations prior to launch to prove out key systems.” For example, at the launch site they run a static-fire operation, where the rocket is fueled and the first-stage engines are lit for three seconds. They are then shut it down, just prior to when the rocket would normally be released. This provides important data without actually launching. “Integration can be complicated and it is critical that everything is done right,” he says. “It requires checking and double checking to make sure everything is working as it is supposed to.When you’re responsible for the hardware critical to mission success, you have to diagnose issues, figure out how to fix them, and implement that fix quickly and properly.”

For Ketigian, this is the perfect environment to work in – it’s a place where theory must have practical, real-world applications. Not to mention that he gets to make things that go into space. “Only a small percentage of engineering projects have the ability to leave this terrestrial body,” he exclaims.

The mixture of constant challenges and great people to work with reminds him, in fact, of his days at Cooper Union. “It reminds me,” he says, “of how people worked together at Cooper, especially during finals, when everyone is down to the wire, and there’s just this aura of everyone being excited about what they’re doing and willing to put in extra effort.”

“Certainly, Cooper is an outstanding place,” says Ketigian. “The professors you have, the people you meet…sometimes you don’t even realize how much Cooper’s given you until you go into the workplace and hear people talk about people paying off  their student loans.Cooper is not a place to go if you’re looking for a traditional ‘college experience’,” he continues, “There is no stadium. There is no meal plan. You have to work your tail off to do well. You go to Cooper to learn the skills you’ll need to succeed in an engineering career, and you also learn to be independent.”

At Cooper Union, his most valuable classes were those where he was encouraged to be hands-on, to apply theory to physical projects. He mentions two of his classes in particular. In his freshman year, he took Digital Logic Design with electrical engineer Yash Risbud, where he learned to build logic systems and experienced the “joys and woes of wiring chips together.” He did his Senior Project class with Toby Cumberbatch. “We had write up our proposals, and present them in a scientifically delivered way, and then of course Toby would tear them to shreds. But you’d end up with a very good project.”

The practical nature of these classes really appealed to Ketigian. Given that engineering is by its very nature hands-on, the more projects he could do that were useful in the world outside academia, the better. “Classes where you actually have to work with real-world hardware teach you that things don’t always work exactly as they do on paper or how you might expect that they would,” he says. “And the little lessons you learn by making mistakes,may actually be the ones that help you most down the road, when you’re working on projects throughout your career.” He hopes that Cooper Union will continue to add emphasis to the applied aspect in terms of its curriculum. Theory alone would never have gotten him to where he is today. “I highly value what I learned in those applied classes.”

For Cumberbatch’s Senior Project class, for example, Ketigian and his partner built what was for all intents and purposes a Kindle for the blind. “We made a refreshable Braille device, dubbed iBraille.” He describes it like this: “It was a working prototype that would interface with a PC over USB, download a book to the device, and display the book one line at a time, as a series of refreshable characters.We both gained a lot of practical experience from this project, from learning how to create a device that utilizes the USB standard to the mechanical and size limitations of the tiny actuators that we used to generate the Braille dots on the display.”

Ketigian still thinks about returning to higher education. At some point, he’d like to finish that Masters degree that he started three years ago. “Though it’s hard to imagine going back to the classroom after working at a place like SpaceX.” On the other hand, having a great deal of exposure to many areas within his field, he now knows exactly what he wants to pursue.

And he’d like to pass on his passion for building things to others. In fact, he says he’s thought about teaching at Cooper. “I’d love to teach a Digital Logic class one day at Cooper,” he says. “I know that Cooper only lets in the best and the brightest and it would be great to be able to influence people like that, and share with them what I’ve learned and what I think is really valuable.” Cooper alumni give back in many ways—Ketigian sees teaching as one of those ways. 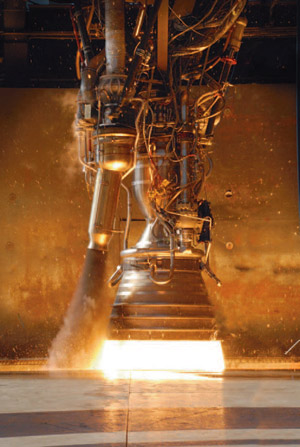 Ketigian was at the historic launch of the Dragon spacecraft on a Falcon 9 rocket, from SpaceX’s Cape Canaveral Air Force Station launch site, on December 8th. He’d flown his father down to see the launch with him. “Seeing it take off,” he says, “was surreal.” “I was in Cape Canaveral supporting mission ops prior to the launch, so I had the opportunity to see the launch live. I had been working night shift, and since the launch was during the day I was able to watch with the naked eye instead of from screens in the control center,” Ketigian recalls.

He describes his experience. “We were standing there, dead silent, just watching it rise off the launch pad. You see it take off, but there’s a delay before you actually hear it because you’re about 5 miles away. The low rumble of more than 1-million pounds of thrust crackled across the sky. Falcon 9 continued to accelerate, fading further and further into the distance, leaving a thin white trail behind. Everyone watching was in awe of the performance; it just worked. I had my laptop and after the rocket was completely out of view we turned to the SpaceX webcast, just in time to see the view from the on-board camera of the Dragon capsule separating from the vehicle’s second stage. At that point the Falcon 9 rocket I had worked on had completed all of it mission objectives, and it was now up to Dragon to complete its own mission (which it did without skipping a beat). It was an unforgettable experience.”

The spacecraft went on to orbit Earth twice, before safely landing a few hours later in the Pacific Ocean. This made SpaceX the first commercial company to recover a spacecraft from orbit, a feat previously achieved by only six nations or government agencies.

What was once only the stuff of dreams and science fiction is now rapidly becoming part of the very real and evolving world of space exploration. At this rate of development, the saying ‘the sky’s the limit’ will soon be something of the past.