“It’s not just the visible work, but the thinking behind it that is the beginning of the creative process. Creativity is essentially a lonely art, an even lonelier struggle. To some a blessing; to others a curse. It is in reality the ability to reach inside yourself and drag forth from your very soul an idea.” –Lou Dorfsman 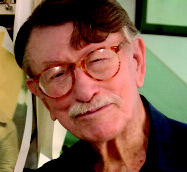 On October 22, 2008, Louis “Lou” Dorfsman died at the age of 90. Lou was a giant figure in corporate design innovation, a 1939 alumnus of the School of Art at The Cooper Union, a member of the college’s Board of Trustees for nearly three decades and, importantly, the husband of Ann Hysa Dorfsman, A’39 and the father of a daughter and two sons.

He started working at CBS in 1946, and over the years—from the late 1940’s until the 1980’s—he served as vice president and creative director of advertising and design. Lou designed everything for CBS’s building, which opened in 1965. Then president of CBS, Frank Stanton asked him to create the interior and exterior graphics. Using two typefaces he designed, Lou brought the new building in line with the CBS image everywhere: in the stationery, elevators, exit signs, telephones, matchbooks and more. In the corporate cafeteria he created the “gastrotypograhical assemblage,” a three dimensional collage of words and images related to eating, kitchen utensils, and all kinds of food. Stanton, before his death in 2006, donated $1 million to Cooper Union in honor of Lou and Ann Dorfsman. That gift will be reflected in Cooper Union’s new academic building at 41 Cooper Square, where the design studio will be named in their honor. Here are some remembrances from some of his colleagues and friends:

“Lou has been described as a vital architect of the broadcast advertising and design industry, and is counted among the nation’s most inventive, imaginative, creative thinkers of our time, as was Peter Cooper in his time. Lou epitomized the legacy of Peter Cooper and his desire to give back. Throughout his professional life, Lou hosted office visits for students from Cooper Union’s graphic design classes. At CBS, too, his personal contribution to the profession was buttressed by his commitment to nurturing and developing young talent.” - George Campbell Jr., President, The Cooper Union for the Advancement of Science and Art

“As a young designer, I was in awe of the man and his work, as were all of the designers of my day. Lou and I were friends for more than fifty years; I could write an entire book about how he affected my life and that of my husband. Lou was always close to his alma mater, proud of it, and willing to assist in whatever ways his talent lent itself. He was the chair of a star-studded design committee that created and planned the Herb Lubalin Study Center, where his entire archive remains housed. He designed the street flags for the 140th anniversary of the college and co-designed the alumni association’s book about Green Camp. He was always willing to help us…all he wanted as thanks was a corned beef sandwich from the Second Avenue Deli. - Marilyn Hoffner, A’48, former Director of Development at Cooper Union, Past president, the Alumni Association 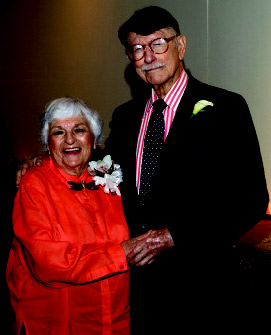 “Lou was a tough boss but a soft touch. His personal warmth was legendary, even through those late and difficult years. I miss him.” - Milton Glaser, artist and designer

“Behind Lou’s aviators, his eyes had a little twinkle. Beneath his neatly trimmed moustache there was usually a little smirk. These were the clues of his enthusiasm for life, and the curiosity that kept him young. Never one to dwell on his own substantial accomplishments, he kept his eyes on the younger generations who he selflessly and energetically shepherded forward—his twinkling eyes always fixed somewhere in the future.” - Stephen Doyle, A’78, creative director, Doyle Partners

“At CBS, Mr. Dorfsman injected a rare social urgency into some of his best advertisements for the network’s public affairs programming. The full-page newspaper ad for “Of Black America,” the first network series on black history, showed a black man in black and white, with half his face painted with the stars and stripes of the United States flag, and with his eyes focused intently on the viewer; the image became a virtual emblem for race relations.” - Steven Heller, The New York Times, October 26, 2008

“Everything Lou Dorfsman has touched was made better for his efforts. Whether it was a television studio set, a matchbook cover, a book, a booklet, a paper cup, a cafeteria wall, an annual report, an annual meeting, Lou did it with taste and style and integrity.” - Dr. Frank Stanton, president emeritus, CBS Inc.

“Lou Dorfsman…combines a lively creative flair with an innate, sure sense of style and superb taste.” - William S. Paley, founder and chairman of CBS Inc.