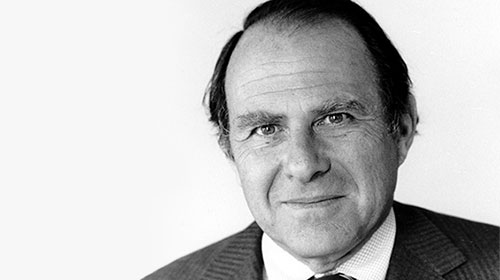 Former chairman of The Cooper Union’s board of trustees, Robert A. Bernhard, passed away on July 4.

Known for his philanthropy, Mr. Bernhard served on Cooper’s board for 41 years and served as chairman from 1995 until 2004. In that position, he helped steward the selection of George Campbell to be the school’s 11th president. When Cooper applied to the Robert Lehman Foundation for funding to establish a visiting artist program in 2003, Mr. Bernhard, who was a trustee of that foundation, championed the proposal. The result was the establishment of the Robert Lehman Visiting Artist Program with a grant of $1 million from the foundation. Today, that grant funds the Intra-Disciplinary Seminar Public Lecture Series, which brings some of the art world’s most important practitioners and theorists to campus. In recognition of his service to the school, The Cooper Union Alumni Association named him Honorary Alumnus of the Year in 2005.

Mr. Bernhard, who was a member of the Peter Cooper Heritage Society, came from a long line of financiers. A great grandson of Mayer Lehman, one of the founders of the Lehman Brothers, he was the last family member to serve as a partner in that firm. There he directed the investment management division and served on the boards of the Lehman Corporation and One William Street Fund.

In 1973, Mr. Bernhard left the company because he wanted to be recognized for his work, not his family connections. He became a partner at Salomon Brothers, working in the corporate finance department with a specialty in the telecommunications industry and international business development, particularly with Sweden and Japan. But in 1981 when Salomon merged with Phibro Corporation, a commodities group, he lost his position and decided to start his own firm, Bernhard & Associates. Initially the company struggled, “but somehow or other, I had to prove to myself that I could go on in business,” he told the New York Times in 1987. Bernhard Associates eventually merged with Orson Munn & Company to become MB Investment Partners.

Like his mother, Adele Lewisohn Lehman, Mr. Bernard was a very active civic leader. Besides his close association with Cooper, he served as a life-time trustee of Montefiore Medical Center and Einstein College of Medicine, and was a board member of Lincoln Center, Vassar College, and Temple Emanu-El, where he also served as the synagogue’s president. In addition, he was president of the New York Urban League, a civil rights organization, during the 1970s.

His daughter Adele Bernhard recently explained why he was drawn to The Cooper Union: "He felt that the school gave an opportunity to recent immigrants in specialized fields such as engineering. He was very fond of the institution and often talked about the fact that it was tuition-less, which he believed provided opportunities to folks who would not have otherwise had such opportunities.....You didn’t get in to the school because of money or connections, a true New York institution."

Robert Hawks, vice president for business affairs and treasurer at The Cooper Union from 1991 until 2009, recalled Mr. Bernhard as hard-working and dedicated to Cooper, and a person who gave staff support to do their jobs well. “He understood what the job of a trustee is and was sincerely devoted to doing his job. He was genuine.”

Mr. Bernhard is survived by his wife, Joan Sommerfield Bernhard; four children, Adele, Michael, Susan, and Steven; his stepsons Timothy and Thomas Sommerfield; his brother, William: 14 grandchildren; and four great-grandchildren. His family has asked that contributions in his memory be made to The Cooper Union and Montefiore Health Systems.