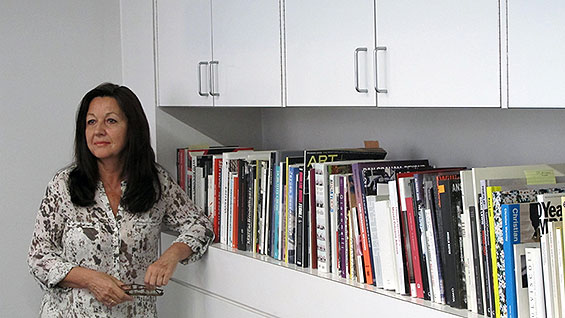 Saskia Bos in her office

Like a wandering sailor guided by the North Star, Saskia Bos has led a peripatetic, international life charted by a passion for art.   Dean of the School of Art for seven years, she presides over one of the most selective art schools in the country, admitting only four percent of all applicants.  Now, besides her usual roster of administrating, teaching, writing and curating she must also guide the school through a fiscal “reinvention.”  As part of the Meet the Deans series she took an hour to reveal a bit more about her history, her influences and her look to the future of the school.

Bos, who demurs on her exact age but puts herself as “a member of the 60s generation,” grew up as the daughter of a Dutch naval officer turned diplomat and an artistically gifted mother.  Born in The Hague, Netherlands she grew up in many places as a result of her father’s career, including the Dutch West Indies (now called Curacao), Japan and France, eventually returning to the Netherlands in her late teens.  After abandoning her initial studies in law and economics she switched to art history.  Her career began in the mid-1970s working on art programs for Dutch radio and television.  The longest stretch of her career began in the 1980s at Amsterdam’s De Appel (pronounced like the fruit) Centre for Contemporary Art, an exhibition and performance space, where she stayed for over twenty years, becoming Artistic and Managing Director.    She now lives in Manhattan’s Lower East Side where her son, a post-graduate economics student in his mid-twenties, occasionally visits her from the Netherlands.

How did art become such a major part of your life?

It must have been my mother.  She was very talented and would always draw with us, myself and my sisters, sitting at the kitchen table.  She was a student at an evening program at the Rietveld Academy, in the Netherlands, though it was called something else back then. Funnily enough I am on their board now.  It was not like at Cooper’s old evening program for ladies only.  It was not segregated.  It was more modern, based on the Bauhaus ideals.  I still remember what she taught us.  If I interpret it in an art historical way it would almost look like Oskar Schlemmer: the basic human form and how to deal it, like a geometric analysis of the body and movement.  It wasn’t really what I wanted to do but it made us look at things carefully.  It made us analyze.  It made us draw.

How did you start to study art history?

I had always been drawing and looking and liking art history until the moment where I had to decide if I was going to study it.   And I thought, “it is so close to my parents.  I want to do something really different.”  So I went away and I started to study law and economics.  I thought, “That will land me a great job.” And I wasn’t talented at it at all and I was so extremely bored.  Then I switched and got accepted in the art history program which related to me in a very different way than the art that my mother had taught us.  I had been looking into Rene Magritte and I had seen shows of Yayoi Kusama.  (She just had a retrospective at the Whitney.)  I must have seen her work when I was 16.  But it was full of impertinent ways of using sculpture.  It appealed to us adolescents.

Do you make your own art?

No. No. No.  I like to write.  I like to take photographs.  I have never considered it art.  I always felt that other people were so much better at it.  There is a Dutch expression, De beste stuurlui staan aan wal or, “the best steersman are ashore.”  You are a better judge if you are not in the middle.

Who are some of your favorite artists?

Oh there are so many!

OK. Give me three.

This question was much easier when I was younger.  Marcel Broodthaers is somebody I studied deeply because of his talent in combining literature, poetry and visual arts at the end of the 60s.  I wasn’t aware of him then but became aware of him later and did a doctoral thesis on him.  I also love the work of Luciano Fabro, the Arte Povera artist who would never reference anything made by others.  He believed in “tabula rasa” as a starting point.   A third favorite would be the Cooper alumna Eva Hesse (A’57).  She was an installation artist before the word was invented.  Her work emanated a sense of respect for fragility.

Can you identify any thread that runs through all the artists that you admire most that makes you excited about them?  Is it the medium?

Is it the themes?

It’s the attitude.  It’s the position the artist takes.  It’s the artist as both a public intellectual and as a poet.  The aspect of poetry and visual language, sometimes translated in installations, sometimes in film, sometimes in a painting, attracts me.  The convincing part of an artist is the coherence and then also fighting against that coherence in their oeuvre.  My criteria of quality are complex, and I try to rearticulate them regularly.  But my personal interest lies in the interdisciplinarity of the artist’s approach.  Also I like artists with a strong position and attitude toward contemporary life and philosophy, complete with statements about that attitude.  I am less interested in artists who shy away from that and say, “it’s all in the work,” which many artists have consciously tried to do.  Maybe I am more interested in the narrative story line. If you want to frame my preferences, you may frame them that way.

How would you characterize Cooper’s art school as different from any other?

The high quality and motivation of an excellent group of faculty set it apart.  We really can pick the top people to teach.  Our full time faculty are connected to the real world and have great exhibitions.  For example we have four faculty represented in the current Documenta show.  I don’t think any other art school here in New York would have four of their faculty in a world exhibition like that.  Someone asked me, “What is Documenta” and I said, “consider it the Olympics of the arts” because it is every five years, not even every four.  It’s really the top.  I think we should be very proud of our faculty.  What characterizes the program is that it is interdisciplinary in nature.  We call it an integrated curriculum.  So you cannot be a major in film or a major in painting.  You become an artist.  It’s really about how to learn to be an artist more than anything else.

On November 15th you must submit a proposal for a financially sustainable future for the school.  What approach are you taking and how is it going?

It is easier to expand on the second part of the question because we are really in the middle of it.  The approach is really a work in progress.  Obviously we are working on revenue-generating programs that in our case could help us support a tuition-free undergraduate program.  We really aspire to do that. We hope to convince the board of that.  But it is still early to give you details. I wouldn’t think you should expect just another MFA in painting.  We are thinking about things based on our strengths. That we are not just educating artists to become successful in Chelsea, like let’s do an MFA show at such and such gallery.  No.  Let’s look at the needs of society and integrate artists through that need.  “Enlightened contributions to society” is one of the ideals in Cooper’s mission statement.  It is a lofty ideal, but it is concrete for the art school not just in terms of aesthetics but also of ethics.  Not just to sell your work just to hang above somebody’s couch.

Beyond the present financial challenges, what are some of the long-term ambitions you have for the school?

Keep being excellent.  That is the most important goal.  Being here in the middle of downtown New York offers so much.  We work a lot with other institutions like Creative Time, like e-flux, with MOMA, with Performa, with Artists' Space.  So we have very good connections.  I think that’s very important for Cooper to be embedded with living art institutions, in other words, institutions that work with living artists.  It would be excellent to also profit from their contacts that they have in financial support.  That would be another ambition: to get  closer to those people who could be, should be, interested in supporting our work.

Where do you see Cooper in five years?  How would it be different?

With successful programs in post-graduate education be it graphic design or institutional critique, which is a field in itself, we should be in a good place. Maybe we won’t yet be in the flourishing stages, at the top of income, but let’s say, at least, we will be flourishing from the point of view of excellence.

When you are not working, what do you do?  Do you have any hobbies?

Art is all-pervasive, even as a hobby.  I still draw but I won’t show you anything, nor to others. I see a lot of films.  The new Ai Weiwei film [Ai Weiwei: Never Sorry] is great.  I read and write.  I love to make an exhibition whenever there is a little bit of money.  But it’s a full plate.  And then again, art and life, for anybody in the art field, they like to mix them up. I certainly do.