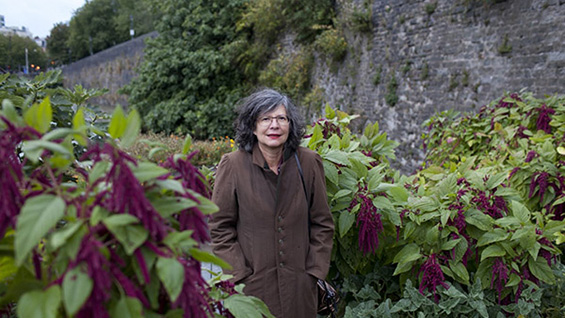 Maria Thereza Alves, who graduated from the School of Art in 1985, will be giving a talk in the Frederick P. Rose Auditorium on November 7 as part of the Intra-Disciplinary Lecture Series. She is winner of the Vera List Prize for Art and Politics 2016-2018 and will be exhibiting Seeds of Change: New York…A Botany of Colonization at the Sheila C. Johnson Design Center, New York, opening November 3, 2017. Seeds of Change uses plant life found in ballast —the waste material historically used to balance ships in maritime trade—to reveal the ongoing impact of colonialism, slavery, and global trade. She has exhibited Seeds of Change several European port cities—including Marseille, Liverpool, and Bristol This is the first time it has been shown in the Americas. The latest iteration examines the history of foreign flora that traveled to New York City by trade ships over the past two centuries.

Ms. Alves' talk at Cooper is based on an ethnography that she began while a student here. In anticipation of that lecture, we asked her to comment on some of the overarching issues present in her work.

You have spoken about de-colonizing art institutions. How can art schools like Cooper decolonize?

It is difficult to decolonize an institute as it must be the country that as a whole that decolonizes… imagine South Africa with a contemporary art museum that was decolonized without the country being so. But certainly an institution like Cooper Union can encourage freedom by seeking ways of working and students who are not part of the mainstream.

I once participated in a symposium at the Academy of Contemporary Art in Tromsø in Norway. The founding director, Geir Tore Holm, a Sami [indigenous group of Scandinavia] artist and musician, had discussed with the professors and students how the academy should be. They agreed that art cannot be taught and that instead what is needed is experience in life. So students and professors planned the academic year according to themes that were found to be interesting and or urgent. The month I went it was about the "Land. ' Iindigenous speakers were invited, and we visited different sites in Norway where struggles over land were occurring. We spent intense days together. We began at 7 in the morning and ended them at 5 the next morning. It was a most beautiful way to be in an art academy. Fully and intensely. At the end of the month, the students presented their research or finished work at the town hall for the residents of Tromsø. Perhaps a discussion with Geir Tore Holm would be fruitful. Also, a scholarship for indigenous students in South America where due to intense racism—it is still almost impossible to find indigenous students in art academies—such being the case in Brazil.

Oh yes, most definitely. And usually Brazilians agree—that is, white Brazilians—that there is no racism. I addressed it most particularly during a conference in 1992 where the entire Brazilian panel for this conference on Artistic and Cultural Identity of the Americas were descendants of Europeans. I asked where were the Black and indigenous speakers. One panels responded that Brazil was not racist like the United States, and that the panelists represented everyone in Brazil. When I hear how lovely it is in Brazil on race issues, I always ask, "And how many Black museum directors did you meet? How many Black gallerists? How many Black collectors? How many Black curators and art writers?" I do not ask about indigenous museum directors etc….these situations are not available to indigenous peoples in Brazil.

In an essay you wrote, you pointed out the racism of the Brazilian cannibalist trope. Would you comment on the ways that the notion of cannibalism has informed environmental depravation in Brazil? How do you think art can address that?

Brazil is a colonial country where the settlers are the cannibals of destruction and theft of life and culture. These settlers still are proud of their “Europeaness” and do not see Brazil as their country. It is there only to be exploited. On a road that I pass every time I visit my mother’s family in a small town in the state of Sao Paulo, I see what we call a "strangulation ring." The area had formerly been the Atlantic Rain Forest which was cut for coffee and cattle and now eucalyptus. For unknown reasons, a small, very tiny remnant of the rain forest remained on one property which faces the road. Now, it is illegal to cut this forest. So the property owner made a strangulation ring, planting eucalyptus trees all around the forest remnant. As these trees grow, the forest is strangled to death. This is the vision of settler society towards Brazil—to the land and the indigenous peoples. There are many ways to address this according to the artist. I am working on this, but it is a long-term project for this area and thus much patience will be needed.